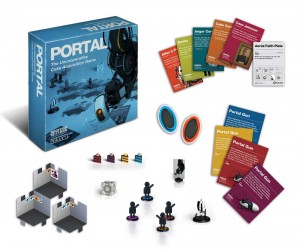 Portal the video game (by Valve) came to the scene in 2007 and blew the roof off with its puzzle driven first person “shooter” gameplay. The game might have been quite a brain bender, but its rather elegant way of teaching and guiding players through the gameplay mechanics made what would have been an otherwise complex game seem very simple. I consider Portal to be a classic! However, today we will be taking a look at Portal: The Uncooperative Cake Acquisition Game (Portal), a boardgame recently released by Cryptozoic Entertainment.

In Portal you are playing as a team of test subjects working against other similar teams in an effort to acquire the most cake. You acquire cake by having test subjects successfully carry out experiments within the lab which usually results in your subjects being incinerated… your subjects are expendable, your cake is not! The game board consists of a set of 15 interlocking tiles, forming 3 rows, that represent testing chambers within the laboratory. The chambers are all on a conveyor belt leading to the incinerator which on each turn will destroy and recycle a room.

The game’s rulebook kicks off with condescendingly sardonic humor we’ve come to expect from the franchise and this humor carries through into the other elements of the game. Players each start the game with 4 of their test subjects on the board and each of their turns consist of the following steps:

When activating a chamber you are effectively incinerating everything within it. Whoever has the most test subjects within that room receives a varying reward which is depicted on each tile. After this takes place the tile is then recycled by removing it from the board, flipping it over, and placing it at the start of any row furthest from the incinerator. This process continues until any player has no test subjects in play or until all of one player’s cake has been incinerated.

Although the gameplay is what I would consider medium weight, it has still been very easy to teach to both board game vets and novices. Though the game plays with up to 4 players, I do feel like it may start to drag with a full table especially if folks are having a hard time seeing how quickly they could end the game if they wanted.

Historically speaking licensed board games have not been particularly good but in recent years this has changed dramatically. Portal: the Uncooperative Cake Acquisition Game is a perfect example of what board game adaptations can be. It explores its own territory without clumbsily stumbling over itself in an effort to remain true to the original subject matter. The game also manages to create a very tactile and evolving puzzle, something which is lacking in the more action and conflict driven American board game market. As I will continue pointing out, I am a huge fan of modular gameplay* and the tile-driven system Portal uses captures this very well. Finally, the components are really great, although the first time or two playing the tiles will feel somewhat stiff when connecting them together, luckily they are fairly sturdy and we have not had any break while playing the game at events.

*Modular gameplay: gameplay that consists of a number of random elements that create a high level of replayability without devolving into a heavily luck driven game. Usually involves tile placement or some sort of varying setup elements.

EDITOR’S NOTE: If you want to learn more about badass board games and mingle with other awesome geeks, check out Andrew and Courtney’s business, Bonus Round Board Game Café in Chicago, IL.

Follow
I am one half of Bonus Round Cafe, an upcoming board game cafe based out of Chicago, IL. We are currently fundraising so that we can open our doors in 2016. In the meantime we stay busy hosting game nights throughout the city. While I greatly enjoy…