“Late Edition” is a new column that reviews a new release after a period of several days and several read-throughs. The purpose is to allow the reader/reviewer to absorb, reflect, and think about the release. Many reviews are done on the day of release shortly after reading the book for the first time. Opinions can change even a day later. When I first came out of seeing Star Wars Episode 1 I was jumping up and down and thought it was the best thing in the world, because I had just seen a new Star Wars film. Several days and eight viewings later I was thinking, “Actually, this is a bad movie.” I want “Late Edition” to contain reflection and remove the day one “OMG! HOLY S***!” reactions.

Dead Drop released almost one week ago, and in that time I have had time to marinate, reflect, and better establish my thoughts and feelings on the book. My initial feelings on the book were mixed, and I did not feel it was a good jumping on point for new readers. Since that first read of the book, I have changed my mind. I now have a pretty high regard for the book, and I DO think it is a good jumping on point for new readers. 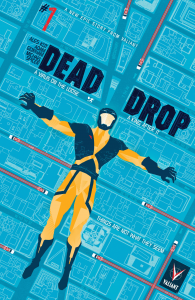 When I first read through Dead Drop I felt the pacing of the book was too frantic and rushed. Things were happening with very little explanation. I wondered how new readers were supposed to understand who Aric (X-O Manowar) is.

Then, I stepped back. I waited two days and read it again. What I realized was Ales Kot did a fantastic job setting up this event. The frantic pace works because the entire issue (and possibly event) is a chase through Manhattan to stop a deadly virus from getting into the wrong hands. New readers do not need to get a deep understanding of Aric, and Kot gives just enough to establish who he is. He is a hero with a code, works for a government agency, and often interprets orders in his own way (see: disobey).

I think what I was expecting from this book was some sort of event-like mini-series, but what is actually here is a fun mini-series set in the Valiant Universe with a cast of characters we have not seen working together so far. New readers do not need any in-depth knowledge of the characters or the world to get enjoyment from Dead Drop, while Veteran readers will pick up small nods and references to other events in the world of Valiant. I believed each issue will follow a different character as they chase down the virus, so it should give new readers a look into the different compartment of the Valiant world.

Valiant is giving their creators a lot of freedom to tell interesting and different stories, so each book feels uniquely different from the others in their line-up. After some reflection my initial hesitations and worries of the book have been set aside. Sometimes we need to step away from a book before passing immediate judgement, and I am glad I did before writing a review I would end up disagreeing with after a week.

If you have not already, be sure to pick up Dead Drop. It is doing things right, and is something fresh. Recent Valiant books are heading into second printings (and beyond), so stop by your local shop before it is too late. Even if you do not read much or any Valiant, this may be an interesting facet to check out.