I’m going to steer well clear of spoilers in this review, so worry not! I’m going to tell you all what I liked about the movie, which is a lot. I’ll also explain the one small thing that could have made the movie better towards the end of the review.

Firstly, I’ll say you don’t necessarily need to have seen any of the other Marvel Studios movies to enjoy Avengers: Age of Ultron. But to get the most out of it you need to have seen the first Avengers, Iron Man 3 and Captain America: The Winter Soldier to flesh out where the team are at.

Avengers: Age of Ultron starts with Captain America, Black Widow, Hulk, Iron Man and Hawkeye in athrilling  action sequence taking out a Hydra base and the movie does not pause for breath past that. I’ve seen some reviews saying this is Joss Whedon doing Michael Bay, which is nonsense. Yes, there’s a lot of action in Age of Ultron, which is shot superbly I hasten to add, but there’s plenty of quiet character moments in true Whedon style. 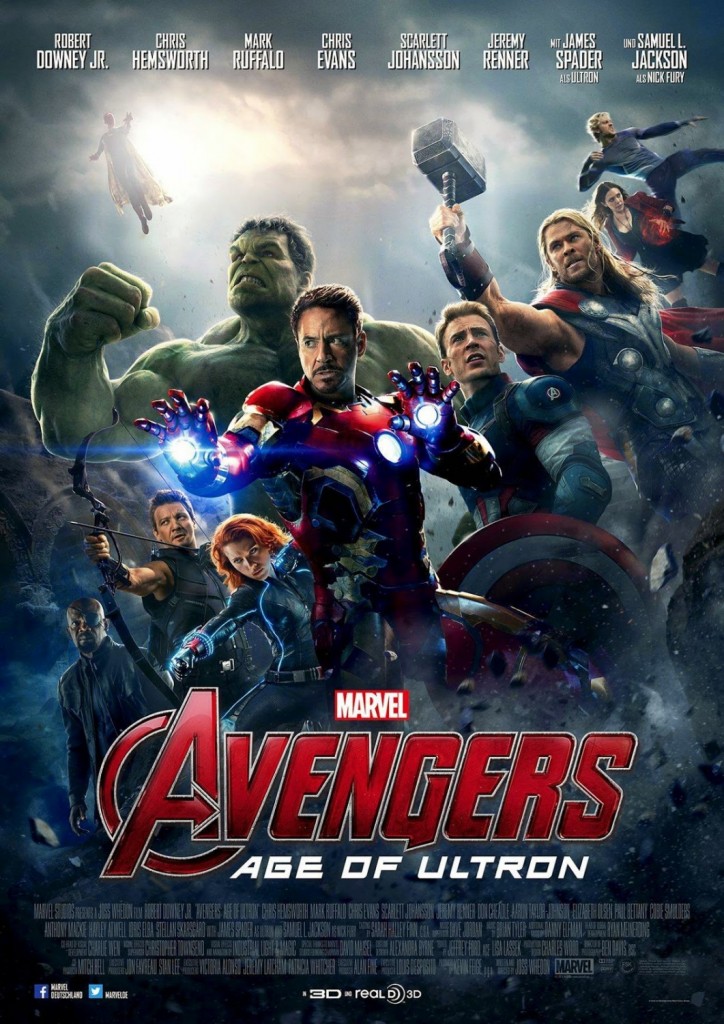 Speaking of characters, they’re all handled in a way you’d hope to see by Joss Whedon. His job was much more difficult this time around, with even more characters to handle but it doesn’t show for a second. Everyone, new and old, gets their moment(s) to shine.

James Spader’s Ultron is a downright maniac. He’s cold, calculating, manipulative and wants nothing more than total annihilation. As with all of the players in Age of Ultron, he’s given a fair few funny lines which do work apart from one which came across as a bit odd given how he’s a machine! Overall, he’s a fantastic villain and confortably the best we’ve seen in an MCU movie so far. You really do wonder at times if the Avengers can defeat him which is something I really want to see from a bad guy. His origin is dealt with swiftly, but it’s by no means rushed. He comes about naturally and it can even be said that he’s the direct result of eveything Tony Stark has been through in the Marvel Studios movies.

The twins, Wanda and Pietro Maximoff’s stories are told well and both are wonderful additions to the cast. Elizabeth Olsen is especially good as Wanda. At times she’s pretty creepy and all the full range of her awesome (she really is incredibly powerful!) powers are shown to great effect. The way she contorts her body and moves when she’s about to control somebody’s mind is a little reminiscant of Sadako in The Ring! Her accent is a little wobbly at times as her american accent slips through, but that’s never been anything that bothers me and it certainly doesn’t detract from her performance.

Pietro Maximoff, played by Aaron Taylor-Johnson is incredibly likable. He’s got plenty of heart and at times he’s a little cocky about his powers which makes for some really funny moments. Pietro isn’t given any scenes as elaborate as his X-Men counterpart Quicksilver, when he does show off his powers it’s so much fun to watch and he has some real stand-out moments. As with Wanda, his accent is a little shaky but it’s easily overlooked.

The returning cast are all predicably comfortable and that’s not to say they’re going through the motions here, they’re all brilliant in their roles yet again. We most definitely see the seeds being sewn for Captain America: Civil War throughout this movie. Tony Stark doesn’t just piss Cap off, he’s so incredibly arrogant and pig-headed about the way he conducts himself that he riles up pretty much the entire team. I wasn’t sure how I’d feel about the Marvel movies going down this route, but it’s not forced and feels natural through good story telling so I’ve definitely had my mind changed after seeing Age of Ultron.

Speaking of Tony Stark, Robert Downey Jnr nails him again. This is Tony Stark squared at times, you want to grab him and throttle him because he’s so damned arrogant and thinks he knows better. Even when he’s told he doen’t know better he finds it funny. There’s still plenty of that charm coming from the character and he has some of the funniest lines that (apart from one that’s caused a stir and understandably so) usually hit the mark.

There’s some great ‘science bros’ moments in the movie, as with the first. They’re also joined by the equally (possibly even more so) brilliant Dr. Helen Cho, played by Claudi Kim, who plays a huge part in what happens througout the film. Mark Ruffalo surpasses his previous performance as Bruce Banner with a nuanced showing. Throwing in a burgeoning romance makes for an interesting thread that runs throughout Age of Ultron and adds even more depth to Banner. You really feel that he’s scared to be around people due to “the other guy” and whilst that’s never addressed with words it’s shown in the way he carries himself. He’s a hugely conflicted character who wants to be the hero, but knows that he’s dangerous in the extreme. oh and yes, THAT Hulk vs Hulkbuster scene is a joy to watch!

The aformentioned romance brings out some more little tidbits of back story for Black Widow and it’s nice to finally learn more about her. She lets her guard down a few times and those moments are quite touching. Scarlett Johannson is, as ever, a convincing badass. She continues where she left off in Captain America: The Winter Solider and I was very pleased to finally learn more about her and who she is.

Hawkeye gets his dues in Age of Ultron, too. His character is fleshed out massively and after many people were disappointed by how he was treated in Avengers it’s pretty welcome. This is definitely the silly, quippy Clint Barton that fans of the comics will appreciate. He’s much more of a hero here. Personally, I’m not quite sure Jeremy Renner is overly convincing with the comedy side of Barton but thankfully the lines he’s given are funny enough to work despite that. He most certainly pulls off the dramatic and physical side of Hawkeye very well, though.

Captain America and Thor are essentially a tag team in Age of Ultron. I’ve always been a huge fan of Chris Evans as Cap, you just root for him and he oozes that calm authority. It’s no different here. You can definitely feel the huge respect that he and Chris Hemworth’s Thor have for each other. They make for hell of a team and they’re given some scenes that are a joy to watch. As you can imagine, Thor and Cap are a formidable pairing! There’s a running joke at the expense of Cap which is hilarious and works really well off the whole ‘man out of time’ side of him.

So, I’m guessing you want to know about The Vision, right? As far as Paul Bettany’s character goes I have only two words and they are SHOW STEALER! I’ll follow those two words with some more, anyway. I won’t explain too much as I want you all to experience him without knowing his story. I’ll just say that he is jaw droppingly powerful, likeable, funny and a worthy addition to the cast. Visually he’s very striking, it appears they added an aura to him in post-production that gives him an etherial glow. Adding him into the Age of Ultron and the MCU will have long lasting repercussions.

Verdict: Before writing this review, I made sure to watch Avengers: Age of Ultron twice. Given it’s importance in the Marvel Cinematic Movie I wanted to be sure that my opinions of it were fully formed. I can happily say that what we’ve been given here surpasses the first Avengers and I speculate that it could have been even better and here’s why:

They’re not overly glaring, but a few times in the movie it feels like the story jumps a little and on first viewing it made me a little cautious as to how I felt about it. I’ve read that 20-30 minutes of footage were taken out of Joss Whedon’s original cut and I’ll hazard a guess that’s the reason the story jumps once or twice. It’s easily looked past just by keeping in mind that Ultron can be everywhere at all times. Amazon’s emails notifying people that the DVD and Blu-Ray are available to pre-order claims that they will include an extended cut as well as an alternate ending. I’ll be very interested to see how this cut (if this information is correct) compares to the theatrical version. Joss Whedon has said before that he rarely has deleted scenes on releases of his work because he doesn’t write scenes that are superflous to the stories he tells. Kevin Feige did admit to cutting the movie to reduce runtime.

After seeing it the second time I saw past that and I can say I love it. Absolutely love it! Jaw-dropping action, great character moments, a formidable Marvel movie bad guy at last and the doors for what to come are firmly kicked wide open. A word of warning too, don’t stay until the end of the credits. There is only a mid-credits sting that I assure you will make you grin from ear to ear. It’s amazing to think that after so many movies we still seem a long way from hitting saturation point. Captain America: The Winter Solider had me excited for what’s to come and Avengers: Age of Ultron has made me even more so. If this truly is Joss Whedon’s swansong in the Marvel Cinematic Universe, he’ll have left it on a high.