If anyone stands a change of ever stopping the Wolf, they can’t try to save people. They can’t play the hero. A hunter hunts. The prey can fend for itself. 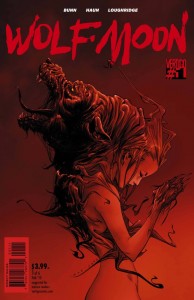 If you’re in the mood for some brutal, visceral werewolf hunting, Cullen Bunn’s Wolf Moon is right up your alley. A new horror comic from Vertigo, Wolf Moon follows Dillon, an obsessive werewolf hunter, on his latest mission. Dillon has been tracking the Wolf for months, and a scar on the side of face suggests his personal interest in finding and killing it. His obsession, however, puts him at odds with Cayce (I wish I could say more about what’s going on here, but Bunn doesn’t clearly establish what exactly their relationship is), who thinks Dillon is crazy for pursuing this so doggedly.

Dillon’s hunt takes him to Kentucky, where Bunn and artist Jeremy Haun give us one of the most brutal series of Wolf attacks I’ve ever seen on the comics page. While the Wolf itself might not be terrifying (I mean, it’s a dog with teeth that can stand and has red eyes), the sheer ferocity of its attack on a burger joint in Dover’s Creek is absolutely insane and unsettling. Haun commits to this extended sequence, with his camera cutting up close to severed body parts and gashes and out wide to fleeing pedestrians. The dynamic shifts in perspective jar the reader into the proper sense of confusion and panic, while always cutting back to the blood and gore and dismemberment that the Wolf is responsible for. Lee Loughridge eschews a more shadowy, moody color palette for one that is distinctly more natural and vibrant, which makes for an even more disturbing visual experience.

Dillon shows up, sure, but the confrontation takes a surprising turn. The end of the first issue takes the Wolf/Hunter story to an entirely new level, with a twist so out of left field that the entire “Werewolf” genre of the book may simply be a ruse for something much more intriguing and sinister.

Buy. Another great, genre-bending horror series from Vertigo. While not necessarily as tight or high-concept as Scott Snyder’s American Vampire, Cullen Bunn’s Wolf Moon still pushes the envelope with its merging of werewolf horror and pulpy avenger story. And Jeremy Haun and Lee Loughridge’s artwork is absolutely stunning in its sheer viciousness. Check it!