Lobo #1 starts the tale of an intergalactic bounty hunter who takes on a mission to kill eight other bounty hunters, all of whom are hunting down the same unknown target (hmm, who could it be?). 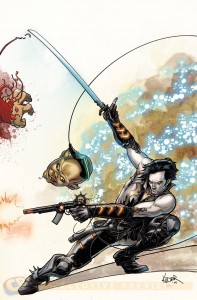 Cullen Bunn (the Sixth Gun, Fearless Defenders, Deadpool) writers this iteration of Lobo as a handsome, nothing-to-lose young man with feelings of worthlessness and guilt over past actions (only hinted at in this issue). Penciler Reilly Brown (Cable & Deadpool) and inker Nelson DeCastro illustrate an attractive book that feels like it belongs in the same universe as the Star Wars prequels — full of colorful aliens, exotic weaponry, and planet-hoping spacecraft. For the majority of the book, the colors by Pete Pantazis give the book a superhero feel. There’s one section, a dream sequence, which uses a different style of coloring and a subtle palette of colors that’s truly gorgeous. The line art in the dream scene is also beautiful.

I grew up with the Lobo of the 90’s. And this is not that Lobo. Not even close. Which is fine. To me, this a new character. I advise anyone picking up this book to remember that while the name Lobo might be familiar, this version is not. Bunn’s Lobo (introduced into the DC New 52 by artist Kenneth Rocafort and writer Marguerite Bennett in 2013), is his own man, owing nothing to the 90’s Lobo. Instead of torturing others like the old Lobo did, this new Lobo seems to torture himself. Don’t get me wrong, the new Lobo is merciless and quick to kill, but there’s no joy in his violence. Bunn’s Lobo has an angsty-teenagery vibe to him. Like he feels so bad about himself and his life that he just want’s to lock himself in his room and write lyrics in his diary with a black Sharpie.

From reading this first issue, I feel the Lobo story Bunn is crafting is going to be a very personal, almost private, story of a man who must come to terms with who he is and what he’s done in his past. The intergalactic space-faring and bounty hunting will undoubtedly help keep the story balanced with fun, adventure, and violence! So far, there are no sidekicks, no buddies, no allies, just a dude starting a new chapter in his far-out life.

Wait and see. There’s a high probability (IMHO) that this comic won’t find it’s footing before it’s kiboshed. How invested is Cullen Bunn in this character? Will he stay around to see the story and character reach their potential? Will a fan base as strong as or stronger than the 90’s Lobo, emerge to support this book?