The Death-Defying Doctor Mirage #1, from Valiant Entertainment, is all character and story development. Think of it as the first act of a movie. We learn what makes the central character special, we learn about the world, and something happens that pushes the protagonist in a new direction and towards a life changing goal. It’s a supernatural mystery story centered on a widow named Shan. 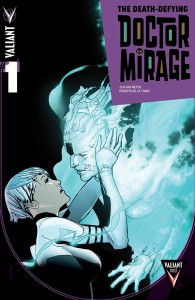 Shan is a medium and paranormal investigator who can talk with the dead and cast spells. She’s also very smart and educated.  Her husband’s death has left her in a state of bereavement. With the help of her agent and friend, Leo, Shan works on living her life to the best of her ability during this incredibly hard and trying time.

The hook of the comic is that while Shan can talk to the dead, she can’t, for whatever reason, talk with her deceased husband, Hwen. One of the most interesting parts of the story is Shan’s relationship with her house, which isn’t fully explored in this first issue, only hinted at.

The colors and art add weight to the melancholy atmosphere that surrounds Shan. The books’ palette fades from pale yellows, to deep reds, to teals and greens, then finally to purples. The book has a slow pace, and it feels like there is something lurking behind the surface, itching to get out. There’s a real uneasiness about this comic book. Like some of the best episodes of the X-Files, The Death-Defying Doctor Mirage #1 will creep you out in subtle ways that linger.

The Death-Defying Doctor Mirage is a comic that should not be rushed. There are too many small bits of information and story to speed read through it all. Read it in a quiet place, with no expectations, and just absorb it.

Buy it – Jen Van Meter, Roberto de la Torre, David Baron, and Dave Lanphear are telling a multi-layered love story with a paranormal bent. There are no cheap thrills here, just intriguing characters, the promise of adventure, with a quiet, simmering creepiness.

Regarding the print “Plus Edition” of issue #1: If you choose to pick up the $4.99 version of the book, you’ll get about a dozen extra pages of content, including a great six page story (written by Tim Siedell, art by Raul Allen, and colors and letters by Patricia Martin) that primarily entertains, but also fleshes out the antagonist of the story.