Peter Parker has been back for a few months and Dan Slott has already loaded up his plate with more than enough for any one Spider-man to handle. In the last issue of Amazing Spider-Man we were introduced to Silk; a girl bitten by the same spider as Peter, but locked away for years to keep the evil Morlun away. The Black Cat and Electro are also conspiring to bring down Spider-Man, while Parker Industries is dragged into the middle of things. Let’s also not forget about Anna Maria and J. Jonah Jameson. 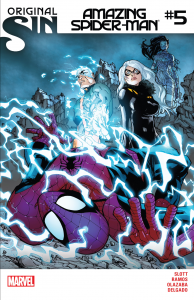 All of these various bits and bobbins are typical in Slott’s run on Amazing and Superior. It is definitely a bit daunting for new readers, but events have a way of fading to the background and coming back several arcs later. With this new run on Amazing Spider-Man it feels like a little too much is going on simultaneously in one issue. I don’t mind the multiple threads in the web Slott is spinning, but I’d like a little more focus each issue with each thread. In issue #5 we have almost all of these different bits popping up. It is a bit jarring when events keep shifting focus, and all I want is a little more progression.

The issue is still fun and enjoyable, but the jammed-packed-ness of it all leaves it feeling a little heavy. And not heavy, in the kind of deep story that makes you reflect on it for a while after reading. It’s heavy like a loaded gyro from the food court at the outlet mall. It wasn’t bad going down, but it is leaving a slight uneasy feeling in your stomach.

The Black Cat storyline is one I have not really cared about, and I was hoping to find out more about Silk in this issue. Honestly, if the cliffhanger is just a tease, I’ll be a little ticked. I hope that something big comes out of it, otherwise the Black Cat line may end up feeling like panel filler.

Humberto Ramos kills it on art once again. I miss Spidey coming out bi-weekly to get Ryan Stegman in the rotation, but I can live with Ramos. It’s familiar and what I’ve come to love and expect from a Spider-Man book in the past few years.

It’s not a bad issue of Amazing Spider-Man, but it didn’t approach the realms of greatness either. I want a little more when reading a Spider-Man comic, and sometimes less is more. I am still excited to learn more about Silk.