After I finished reading Armor Hunters #3 I was in awe. I wanted to sit down and write this review immediately. Knowing that initial reactions can skew how we perceive different things, I did what I always do and took a step back to reflect. I let a few hours go by, read some other stuff, then came back to give the issue a re-read. I can clearly say that this issue #3 of Armor Hunters was absolutely 100% awesome. Not an awesome-sauce, but 100% pure grain awesome (be sure to chase with Unity). 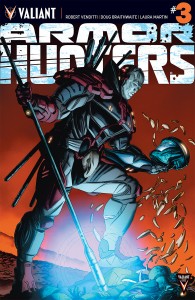 I have to give major respect to Braithwaite and Martin on art duties. The issue was stunning and beautiful across several different environments. The level of detail does so much to pull the reader in and make us feel like we are living this. It adds to the story and does not distract from it. There is conversation between Primary and Quartz about the future of the hunts, but we see it more in the face of primary just how much of a toll their lifestyle has taken on him. The reflection of Capshaw’s face on Primary’s mask is another small, minute detail that sells the fantastic art.

Venditti has moved events to an interesting point. I was expecting to see more fist-on-face blows being exchanged this issue. The fact that this has not yet happened adds to the creativity of the writing, and shows Venditti is using all of the tools available to him in the story.*

I can’t rate this a perfect issue. The reasons for that are Capshaw. She makes a plea with Aric at one point, and it did not sit well with me. It could be she was trying to play against Aric’s sense of duty towards his own people, but it just felt off to me. There was just one little line of dialog I did not like, but that did not affect my enjoyment with the rest of the issue.

A very, very solid BUY. So much of what I have been hoping for came about in this issue. It has made the event well worth it, and has tied in well some of the character development Kindt had been doing in Unity.

* I want to say more, but fear any subtle hints I drop could spoil the issue for those of you that have not read it yet. Be sure to check out episode #8 of Talking Valiant when that releases in about two weeks.