We are now deep into the 4th chapter of Saga, which really feels more like a second season than a continuation. Since the end of issue #18 the story has jumped forward a year or so to show Hazel as a toddler and a young family trying desperately to get by. They are on a different world and in a lot of ways this is a very different story. But that certainly isn’t to say it’s bad. 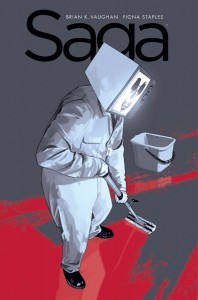 Issue #21 begins with Alana on set at the Open Circuit–the superhero-soap-opera-like television station where she works–complaining about the outfit she has to wear. The scene plays out and we begin to realize that she’s going to end up having a drug problem before too long. Marko, on the other hand, is spending almost all of his time being Daddy, and grows closer to Ginny, fellow parent and dance instructor. This part of the Saga story is so realistic that it’s kind of scary. We watch as these characters make decisions that we know will tear them apart, and we know it because we’ve all seen it before. The other half of the story is still uniquely science fiction, and just as uniquely Saga. First, we get an interlude with the robot madman/janitor Dengo, who has kidnapped the offspring of Prince Robot IV, who got a little broken at the end of volume three. We don’t know what Dengo is up to yet, but we now know he’s headed to the same planet where our young family is hiding out. Also in this issue, we get a glimpse of Prince Robot IV himself, still holed up in a brothel somewhere, and only just becoming aware of the kidnapping. The issue ends with him declaring that he must see his father, King Robot.

I’m still getting used to the story and the storytelling in this latest series of Saga, starting with issue #19. As I said earlier, the story with the family is almost too real, like it could be happening in a million households across the globe right at this very moment. The only difference, of course, is that one member of this family has horns and the other has wings. Put that together with the Prince Robot story, however, which is very much rooted only in the reality of Saga, and writer Brian K. Vaughan has created an interesting push and pull of real and unreal. I’m just not sure how much real is too real in this case. These are, of course, the type of things one debates only on a truly great title, when the question of good vs bad has been long put to rest. For me, it’s not unlike debating the merits of season one vs season two of my favorite show: it may just be different, and that’s okay.

Fiona Staples art is, as ever, perfect. Most of this issue is just people talking, but Staples makes it all just as visually interesting as the fight scenes. It doesn’t matter if she’s drawing televisions or interstellar lifeforms, it all looks amazing. I forget sometimes that Staples does all her own color as well as pencils and inks. In this latest arc, the color seems to have been dialed up to 11 as the world where the family lives looks like one giant park playground. Also, the world of the Open Circuit is similarly technicolor. Saga is one of the best looking books on the shelves right now, and it only gets better as we get deeper into the universe.

Buy it. Despite my misgivings over the “reality” of the story, Saga is still comic storytelling at it’s very best. I know that a lot of people read Saga in trade, and that’s probably the best way to go about it. For myself, I usually collect five or six issues and then read them all at once. But, no matter how you go about it, you really should be reading this book. It is absolutely the best of what non-superhero comics has to offer right now, and it’s just going to keep getting better.