I have been enjoying what Jeff Parker has been doing on Aquaman since Geoff Johns left the series, but this issue was not stirring up my excitement like the previous issues in his run. I will be perfectly clear that I did think the issue was good, but nothing amazing this time around. 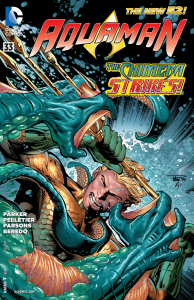 This issue focused a lot on the Chimera creature that Aquaman ran in with last issue. I do not have a problem with spending time to get to know a character more. However, there does not appear to be much below the surface of this creature. I appreciate that Parker tries to do something with the villain’s conflicting motives, but for me it was too base level.

There are some real threats out there for both Mera and Arthur, and I would liked to have seen more of those story threads being pulled. Chimera feels like a distraction that is here to give these threats sometime to grow, rather than having the heroes go after them now. It feels a little too predictable. Hopefully, I am totally wrong and Parker throws me for a loop in the next issue or two.

Pelletier has been kicking butt on art since he joined the book. Issue #33 still looks great and the underwater art is pretty fantastic. I like the difference in colors Beredo uses between underwater and on-land scenes. Just like coming out of a dark place and into a brighter one, it may take your eyes a second to adjust.

For me this issue is passable, but not the best issue of Aquaman I have read. I wish we got more of a focus on either Arthur or Mera this issue.