Welcome back, forum fighters! It’s been a while since we’ve had a regular From the Forums post, but we’re back in the thick of it this week and looking at what YOU had to say about the world of comics! Let’s see if I remember how to do this!

We’re all about the comics this week, so let’s take a look first at DC.

Forever Evil (finally) wrapped up recently, and arcticbeast thought it was something for the history books: “I absolutely loved the event. The best event comic I have ever read. There always seemed to be something at stake. I also thought the final issue was fantastic. I don’t think I had ever been as excited to read a comic book and I wasn’t disappointed. So much happened but I always felt that things were clear.”
And gamesplaydre (who wins this week’s avatar award for best beard) agrees: “It’s a really great story and I personally think it’s one that will stand out even in the years moving forward that people will come back to.” 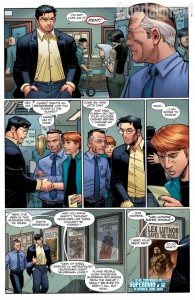 Superman will be changing hands at the end of the month as superstar creators Geoff Johns and John Romita, Jr. take the reigns. Excitement for this book still seems to be high, and scouts1998 shared some preview pages with us from the upcoming issue #32: “Looks interesting, i think that the daily planet stuff [is] some of the best we have seen as it suits JRJR’s style more and Johns has written that stuff well before.”

And then, we have that other event for DC: Future’s End. nikcel is torn: “There are parts of Futures End that have my attention and parts that I do not care for. For me, I think there are too many characters and not enough of a plot besides the struggle with each character. There is no overall plot or at least no development to that plot in the last two issues. For DC to have money from me every week for a year they are going to have to step up their game.”

And now, onto the House of Ideas. (Bob, if you’re reading, I’d love to know the origin of that name.)

First, let’s talk about Moon Knight. While many readers, including myself, have been enjoying this title, Talking Comics forum members are skeptical that the book will continue to be good when Warren Ellis and Declan Shalvey leave the title after issue #6. joestate is keeping an open mind: “Ellis is what got me interested in the character in the beginning, but that got me to read the prior run and that solidified my interest in the character. So now I’m more than willing to follow moon knight being handled by other teams to see if I like how they handle him.”
Meanwhile, optimus is less confident: “Well I will give it one or two but if they are not written as one and done like Ellis I am dropping.”
And pacino makes a case for the new creative team: “What about Greg Smallwood??? He’s a terrific artist and worthy of your money.”
Brian Wood and Greg Smallwood take over the title in the fall. 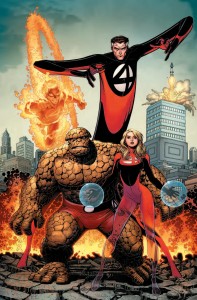 There was a small dust up last week over a possible cancellation of the Fantastic Four. Raider30 had this to say about the current state of the title after the most recent renumber and change of creative team: “Right now this book is absolutely terrible. I’ve been an FF fan my entire life. They were some of the first comics I ever bought when I was a kid and honestly, right now, I would prefer they go on indefinite hiatus(as possibly referenced in another thread) than continue with the downward slide that has been in place for *years* now.”
On the topic of the cancellation rumors, Bleeding Cool recently hypothesized that Fantastic Four and it’s Ultimate Universe counterpart might be cancelled to reduce visibility of the characters in order to slight Fox, who own the film rights and is currently in development on a new movie. Our own Mr. Bob Reyer had this to say on the subject: “It would be an awfully spiteful move to cancel a title selling 30k a month just so as not to promote a film property that doesn’t even resemble your book, and it’s not as if all of those lost readers would automatically pick up other Marvel series to replace it. Additionally, some might drop the Marvel line entirely as a protest, so it seems like taking a hit on “20” after you’ve seen a raft of aces come out, but stranger things have happened!”
Fortunately, Marvel Senior VP of Publishing and Executive Editor Tom Brevoort has mimicked Bob’s sentiment about the ridiculousness of such a move, but did not outright deny that FF might be headed for a hiatus. His response can be read here.

Well, forumers, there is a lot more to talk about, but I’m running out of room, so I think we’re going to wrap up here and pick it up again next week! Between June 1st and the 8th we had 170 new posts and four new members. The most pulled books for last week were Cyclops #2, Action Comics #32, The Wake #9, Moon Knight #4, and Original Sin #3. I found the shuffle button on Pandora, and so this week the music was just one big shuffle of all of my playlists. The highlights were: Talking with Fireworks/Here, it Never Snowed by The Twilight Sad, The Mission by Puscifer, Man in the Box by Alice in Chains, Pixel Journey by Xilent, and Worm Drink by Clutch.

I’m thinking next week will either focus on the indy/non-big 2 comics, or we will take a look at your comments on the various podcasts coming out of Talking Comics. If you have an opinion on which you’d like to see, drop a line in the comments!

Thank you all for reading. See you next week!