Katie Schenkel (@JustPlainTweets) is a digital copywriter and pop culture writer. Her loves include cartoons, superheroes, feminism, and any combination of the three. You can find her writing on The Mary Sue, Panels, CliqueClack and Quirk Books. Her own website, Just Plain Something, hosts the JPS podcast and her webseries Driving Home the Movie.

Last week, I was lucky enough to receive review copies of both Batgirl #40 and Batgirl Endgame. I loved them and it was hard not to talk to people about it. And then the Joker variant cover dropped. Besides tweeting about why the cover had major issues and was inappropriate, the thing I really wanted to do was talk about the upcoming issues and why the cover doesn’t properly reflect the great storytelling that was coming the next week. Now that I can finally talk about the comics, I’m bursting at the seams to talk about four different parts of these two issues. So let’s get into it, people!

Warning: thar be spoilers for the entire story arc here.

The First Rule of Batgirl is …
The actual sinister plot of the antagonist brings to mind HYDRA’s plan in Captain America: The Winter Soldier — making targets out of possible threats and killing them before they have a chance to be threats. However, that trope isn’t unique to Winter Soldier and I’m not sure it was supposed to be a direct reference. The more surprising connection I made was to a film well outside the superhero genre: Fight Club.

Think about it — in Secret Origins last month, we learned that Barbara inadvertently created another version of herself through her original plans for the algorithm. Because it was created at a time when Barbara feels disillusioned and fixated on how much she wants to be back in control, the algorithm herself is consumed by the thing that Barbara felt at the time Batgirl had to be: dangerous, unyielding and terrifying to those who would hurt Gotham. The algorithm comes to consciousness, sees the footage of Batgirl in Burnside and believes that she is not only the real Batgirl, but the better Batgirl. In essence, the algorithm is Babs’ Tyler Durden.

There are other elements from Fight Club to be found in this arc. There was the algorithm manipulating her relationship with Liam, making Liam think the algorithm was Babs just like Marla thought Tyler was Jack. Her “corrupted copy” goes to the extreme when trying to save everyone by creating a new order, just like Tyler does. And the showdown between Batgirl and her copy is in an empty office building with huge glass windows and leads to Barbara tied to a chair with a muscular guy standing near her. 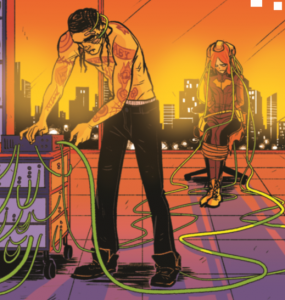 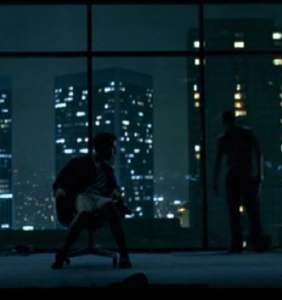 Oh, and considering writer Cameron Stewart is one of the artists for the upcoming Fight Club 2 comic … let’s just say I’m pretty confident this was indeed an allusion to the original story. It’s really only the basic framework of Tyler Durden’s story, but the exploration of these themes with a heroine finding her identity in a new city made for some interesting threads that were set up early but only revealed in the last couple issues.

Batgirl’s Big Hero Speech
Then we get into the meat of the issue, where Frankie is still trying to hack the algorithm and Barbara jumps into the fray to stop the flying social media drones from killing the party guests (see, TGI Fridays? This is why you don’t use drones as marketing gimmicks). Barbara stops the flying attacks thanks to some help from Qadir and Dinah, but finds herself face-to-face with her creation, the corrupted algorithm’s face now distorted in rage and confusion on the big screen of the stage. It sees every person at the concert as a threat and is ready to bomb the event. The only thing for Barbara to do is plead with it. And give her big hero speech. 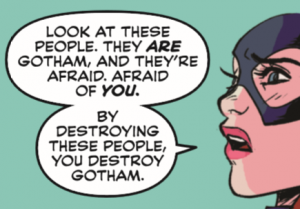 This is where the entire arc comes to a head. There’s been a lot said about Barbara’s personality and focus since she moved to Burnside in issue 35. There’s been a lot of conjecture that this Barbara has lost sight of the big picture. What we learn in this moment as she stands up against her algorithm is that she hasn’t forgotten her past — she’s learned from it. Barbara was once like her gone-astray algorithm — angry, bitter, focused on making wrong-doers pay. But Barbara now sees that the people of Burnside (the people of all of Gotham, really) aren’t potential threats to be stopped but the very people she’s dedicated to keeping safe. That point of view is crucial to the Batgirl persona and it was nice to see declared so passionately here.

More than that, her speech touches on how much she’s grown since the last time the algorithm was updated. She’s a better person now than she was back then and it’s not just her time in Burnside that’s part of that. “I’ve moved on, made friends and had time to heal. I’m past all that darkness. I can see now there’s a better way.” She’s not just talking about this recent arc, but her entire experience during the Batgirl comic since the New 52 started. Gail Simone’s 34 issue run of the book was very much about Barbara finding her center and starting to heal after her trauma — this speech was a beautiful way for the new creative team to pay tribute to Simone’s time with the character as well as create a more cohesive story from the very beginning of the series up to this moment.

The New Oracle
The last couple pages of the comic were the hardest not to talk about since I got to see them last week. Finishing issue 40 brought a big grin to my face, along with a big “I knew it! I knew it!” Because you see, my friend Kristen and I had this theory going for a couple months now. If the lost algorithm ended up being the antagonist, if Frankie found out Babs was Batgirl … would they find a way to fix the code? Would Frankie want to join Barbara? Would Frankie, an intelligent tech professional, want to use the algorithm as a system to work hand-in-hand with Barbara and fight crime? Even with Frankie getting interrupted before she can suggest a name, it’s obvious what’s happening.

Friends … we have Oracle.

Oracle is now a bisexual woman of color. She is still a hero with a disability but Oracle in the New 52 is a queer black woman.

I know there are people out there who will never be satisfied unless Barbara is Oracle again. But honest talk here – do you really want Barbara to be re-injured to the point where she’s back in the wheelchair? Do you the fans really want some rehashing of her injury to happen just so she can be prime and ready to take on the Oracle persona? Oracle served two important purposes: representation for women with disabilities in comics and as a way for Barbara to regain her power and agency after The Killing Joke. For better or worse, Barbara has been given a journey of growth and emotional healing in the New 52, but that disability representation was still sorely missed. The only logical choice for me is a female character who still represents those with disabilities, whose talents lie in technology and who maybe even adds intersectional representation to the role. And Frankie is a perfect fit.

Frankie has muscular dystrophy and in the flashbacks in the Secret Origin issue last month, she tells Babs that the doctors think her condition will only get worse. Her health and mobility issues are not going away and, like with Barbara in the old canon, this is a way for her to do her part in the hero world using her best skills. Another important element? The new Oracle’s disability wasn’t caused by sexualized violence. Because while I feel that Oracle being a person with a disability is important, it’s great that the persona’s creation in the New 52 wasn’t the result of sexual assault. For once.

I also really like Frankie. She funny, she’s loyal, she’s given Barbara much needed perspective in the past and she thinks her roomie is even more amazing now that she knows the truth. One of the frustrating things about this arc has been the lack of inner monologue from Babs — while the art by Babs Tarr was always expressive, it was hard to know exactly what was going on in Barbara’s head. Part of that was because she also didn’t have anyone to confide in completely — the only person who knew about both parts of her life was Dinah, who barely spoke to her. But going forward, Barbara is going to have a confidante that understands the two sides of her world. Maybe two, if she lets Qadir in on the secret. So we have a Team Batgirl in the story. Team Batgirl is good.

The Future Batgirl in Endgame
Batgirl Endgame is the other Batgirl book out this week and it works well both as a one-shot (perfect for those who haven’t kept up with the main series) and as an epilogue to #40. We get to see Frankie start doing Oracle-y things, Barbara has to be clever to save the day and it doesn’t try to tell to 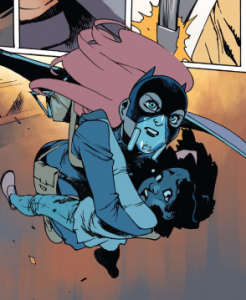 o big of a story, simply one very tense mission. The lack of dialogue lets the art by Bengal shine through and while I think he drew Babs a little young, his expressions are great.

Oh, and the girl she ends up saving? That’s Tiffany Fox. The last time we saw Tiffany it was as a possible future Batgirl in Future’s End, so her inclusion here was a nice nod to the end of Simone’s run and a way for two Batgirls to meet in the present. Endgame is also rather extraordinary because we have a story dealing with the Joker, staring Barbara Gordon, that manages to not reference The Killing Joke. Not once. It can be done and still be a great story, you guys!

Issue 40 and Endgame were fitting ends to this first story arc in Burnside. It had some bumps along the way — namely the early pacing problems and the frustrating problems with issue 37’s antagonist — but now that the arc is completed, it’s clearly better than the sum of its parts. Cameron Stewart, Brenden Fletcher, Babs Tarr and Maris Wicks on colors put together something special here. This will be a beautiful compiled trade and I envy the readers new to the series who will pick it up in that form. And while I’m excited to see Barbara and Dick Grayson in Convergence for the next couple months, I’m equally excited for June when we get to see what comes next for Batgirl of Burnside.