This is it. The end of the road. The journey that started at the very end of 2012 with Amazing Spider-Man #700 wraps up this week in the pages of Superior Spider-Man #31. It’s been a long, sometimes strange trip, but one thing I can say for sure: it ends quite well. 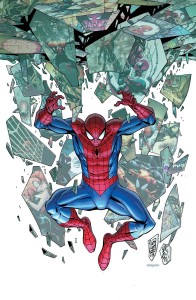 This issue begins moments after the last one ended: Peter Parker is back in his own body, suited up, and ready to fix the mess that Otto left behind. After the first of several cracks about how he apparently just went to change his outfit, Peter talks to Charlie, who is now almost cured of the goblin serum. She fills him in on some crucial details that he’s missed, and he takes off to save the day. After checking in with Aunt May, Parker runs into Miguel O’Hara–aka Spider-Man 2099–and after filling him in, the two of them team-up and head out. They take down some goblins, do a little patching up with the Avengers, and then head to the Alchemax building to confront the Goblin King and save Anna Maria. The best moment in the book might just be how quickly the Goblin realizes that he’s no longer dealing with Otto Octavious, but Peter Parker, and how it shakes him. The Goblin is unmasked, which I thought was a neat little twist, and Peter saves the day, but not before setting up some of the conflicts he’ll have to deal with in the future.

In many ways, this was the perfect final issue for Superior Spider-Man. It had a lot of “hell yeah” moments, plenty of action, lots of setup for the next series, and nearly pitch-perfect characterization of a returning Peter Parker. Normally, when a big arc cleans itself up in a single issue, it feels rushed or overly simple. Not so with this book–the pacing felt right on and the wrap-up made internal sense. I was even impressed with the backup, where Christos Gage’s dialog really has a chance to shine. All that really happens is that Peter makes amends with Aunt May, and MJ and Charlie have a conversation about what it’s like being a friend of Spider-Man. The deeper story, however, is about choices and consequences, both for the hero and for those around him–how it’s okay to choose to live your life outside of the danger that comes with being a hero or associated with a hero. What could be high handed and preachy ends up poignant and thoughtful under Gage’s pen.

Artist Giuseppe Camuncoli Has done a great job on the entire Goblin Nation run, and this issue is no exception. Peter’s character shows through here in the art as well, and he seems right back to his old web-slinging, high flying self again. Backgrounds and characters alike are detailed and fun to look at. Colors by Antonio Fabela were also top-notch. What I found the most impressive was how the passage of time in this issue is indicated by the color of the sky as the night comes to an end. Peter’s fight with the Goblin King takes place during sunrise, and the colors and shadows perfectly reflect that time and the dawning of Peter’s return. Good stuff all around.

Buy it. Even if you haven’t been following Superior Spider-Man, you will want to pick up at least this issue if you’re wanting to jump in on Amazing Spider-Man #1 at the end of the month. As I said before, this issue sets up many of the ongoing threats that Peter will face during his return to the red and blue suit, and readers will want to read this for those origins. Plus, it’s just cool. And so much fun. It’s great to be reminded of just how much fun it is to have Peter Parker as Spider-Man, as opposed to Otto’s near tyrannical portrayal of the web-head. I personally was also happy to get a little closure with Miguel O’Hara before he embarks on his own series in July. Pick up this one and drink in every page. You’ll be glad you did.