Translucid is a book that doesn’t want you to know which end is up. On the one hand, maybe it’s a story about a boy who has created a superhero fantasy in order to escape the reality of his home life. On the other hand, maybe it’s something else. There aren’t really many sign posts to guide us in the journey to the truth, but I’m sure that subsequent issues will reveal that the truth, in this case at least, is not easily found. 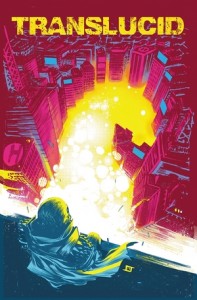 The story begins in the bedroom of a boy whose name we never discover. He is designing some kind of helmet on lined notebook paper, like we all did at that age. One the next page, a well dressed man, freshly released from prison, approaches a limousine. Once inside, he pulls a huge mask shaped like a horse’s head from a protective cloth. This is The Horse, the super villain of the story. His first order of business is to check in with the next super villains down, the Apocalypse 3–who have thrived The Horse’s absence, and let them know of his plan. Next thing we know, the Apocalypse 3 have the Empire State building and The Horse himself taken hostage. The whole city is crying out for the return of The Horse’s nemesis, the hero called The Navigator. The Navigator appears on an adjacent rooftop and surveys the scene. He’s somewhere between Iron Man and Batman–stoic, almost robotic, with a lot of cool tech. But, a turn of the page and we are back in the young boy’s bedroom as he seems to be assembling and describing The Navigator’s utility belt. But, another page and we’re back in the action. The Navigator swings into battle, releasing other hostages while searching for The Horse. Somewhere in the middle, we see the boy’s father stumble home, apparently drunk. Navigator rescues the Horse, allowing the building to be destroyed, only to be double crossed by his oldest foe. We start then to realize that The Horse’s sole purpose in returning is to provide The Navigator with a reason to continue being The Navigator. Finally, the story wraps up with the boy hearing his father break a bottle and the words, “From one nightmare to another….”

I honestly can’t tell you at this point whether the story of The Navigator and The Horse is the imagination of a young boy, or whether the young boy is either one of the main characters in his childhood. Or maybe it’s something else entirely. I can say, however, that I found the book interesting enough to pick up the next issue. The cover says that this is book one of six, to which I will give my usual speech about waiting until the trade comes out to enjoy the story all at once. However, I sincerely believe that Translucid might actually benefit from a monthly reading. The anticipation between one issue and the next seems to be built into the story in a way that is different from other books I’ve read recently. You can, of course, wait until the trade, and you would save yourself some money and some time. Consider, though, if you’re interested in this title, reading it one issue at a time just for the experience of it. I think it could be very rewarding.

The art in Translucid is quite good. Illustrator Daniel Bayliss does an excellent job capturing not only the drama of the superhero story but also the creativity and fear of a young boy in a bad situation. Bayliss also doesn’t skimp on the backgrounds in his panels, faithfully recreating ctiyscapes in wonderful detail. I have to say, however, that the colors in this issue–provided by Adam Metcalfe–are the real standout. In the few pages of the boy’s world, everything is a shade of drab brown. In the world of The Horse, colors seem mostly normal, but once The Navigator steps onto the scene, suddenly everything takes on this otherworldy palette of greens, blues and purples. It might just be that this part of the story is supposed to take place at sunset, but I also think it could be a clue as to which story is “real” and which is not.

Wait and see. While Translucid isn’t quite as weird as the title would have you believe, it’s not a Spider-Man book, either. There are levels and layers of meaning here that go beyond the somewhat trite meta-superhero stories that we see so often now, to explore some of the philosophy of what it means to be a hero. There are obvious parallels to Batman and The Joker in the two main characters, especially reminiscent of Scott Snyder’s recent take on the clowned prince of crime. But, I think there will also be another story about why we need heroes and what real villains look like. If all of that sounds like your cup of tea, then definitely check out Translucid, and you can let me know if my guesses are right.