I’ve been picking up all of the number one issues that Marvel has been releasing recently as a part of their All-New Marvel Now initiative. Since I had never read a solo Wolverine series, I decided to check out the first few issues of Wolverine. My interests were slightly piqued after the first issue, so I decided what the heck I’ll give the first arc a shot. However, after this week’s issue I’m done with the series. 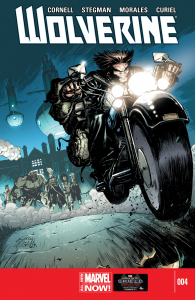 Before I get into my reservations with this issue (and the arc in general), let’s take a moment and talk about the positives. Sorry, that should actually be singular. Positive. I’m a fan of Ryan Stegman’s work, and he and the art team are the one saving grace here. Given with what he had to work with Stegman brought an appealing aesthetic to the series, despite being not being properly utilized (there was a flow chart mid-issue that was better suited for a recap page). The art team was the flecks of gold you would find in a turd after going on a bender of nothing but Goldschläger. Perhaps calling the issue a turd is a bit harsh, but I was sat on the toilet as I reread this and issue #3 to prep for the review. (Freud would have something interesting to say on this for sure.)

In the first issue of Wolverine we were presented with Logan as a bad-guy. My first thoughts were either he was mind-controlled or faking it for some infiltration. I decided to keep following the series in hopes that the predictable route was not the one being taken. Last month we learned that Maria Hill actually enlisted Wolverine to infiltrate The Offer’s organization as a step to taking out Sabretooth. We were left to wonder whether or not Logan was starting to sympathize with the members of his new gang.

This back and forth over whether or not Logan is bad or pretending continues throughout issue #4. The issue is filled with flashbacks as Logan intentionally destroys his friendships and relationships with the other X-men. I understand that Wolverine is known for being an angry brute, but his character has developed and matured tremendously over the events of the past decade or so, and all of this felt too forced. Even though he was faking it, the threat of killing Kitty Pryde didn’t feel genuine. There is a lot of history between these two, so I’m wondering why alarm bells were not going off. The bouncing between “is this a charade or possibly-not-a-charade” felt like an extended, worn out take of the exchange between Vizzini and the Dread Pirate Roberts in The Princess Bride. Someone drink the damn goblet already! It has felt like nothing has really happened since issue #2.

The ambiguous state that Logan is in has left for almost zero character growth, development, or exploration in these first four issues. I get it. Logan is mad! RAAAWR! *yawn* Can we get the story moving a little? This is billed as 4 of 4, but all it feels like we got was an introduction to “Bad  Logan” in issue #1 followed by three issues of anger and confusion.

Pass on this “closing” issue of Wolverine’s first arc. It feels like the series is just idling. If you like dropping four bucks to see Wolverine pop his claws, get angry, slash up a few robots in the danger room, and get all unconvincingly super angry, then pick it up.