It’s funny how a single moment or image in a comic can dash away any reservations you might have had in terms of buying into the particularly fantastical world that’s being shown to you.  It’s like a switch gets thrown in the back of your mind and all of a sudden you find yourself going “Yup, alright, I can get behind this, take my money now please!” While I’ve already pledged my hard-earned dollars to The Wake, there was still a part of me that was slightly on the fence in terms of the new waterworld-style setting that was presented to us last issue.  It wasn’t that it was being done poorly or anything, it just hadn’t grabbed me the way the first half of the mini-series did.  That all changed after this installment.  The Wake #7 doubles down on the sci-fi elements and, thanks to some fantastic work by Sean Murphy, offers up one of the most exciting and visually rich issues yet. 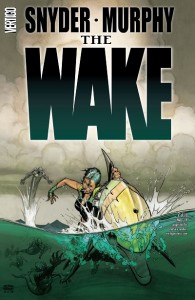 After being caught trying to intercept the mythical “Signal” on her contraband radio, we find Leeward and her friend Pub now held captive upon a salvage ship run by The Arm and captained by Marlow, the man who killed Leeward’s parents.  Unsurprisingly, she soon concocts a plan to escape the ship but is interrupted when they are attacked by an army of Mers and their gargantuan leader.

As mentioned earlier, so much credit needs to be given to Sean Murphy this issue.  The way his illustrations give new depth to his and Snyder’s vision is crazy to see, as layer upon layer gets added to The Wake’s new setting.  This world feels larger and more complex than it should after only being presented two issues ago, and it owes that feeling to the richness of Murphy’s artwork and the insane level of attention Snyder seems to give to even the smallest of details.

Some heavy emotional resonance is brought to this installment’s pages as well.  The rendering of young Leeward and her family in the book’s flashback opening is beautiful, giving a new dimension to our hero and some more insight into her background.  It’s fairly certain that we’ll be revisiting this moment in her life, and it’s just as probable that we’ll need some tissues in hand when we do.

And if you’re wondering what the particular “flipping of the switch” moment for me was this issue, take a look at the kickass airship Leeward and her family are riding in the opening scene.  I want to live in a world where these are real, minus the having-to-use-them-out-of-necessity-so-that-scary-sea-monsters-can’t-reach-us thing.

Buy It – Prepare to be treated to another stellar issue of The Wake, one that features some of Sean Murphy’s best artwork to date and an ending that’ll leaving you rereading the last two pages to make sure they actually just happened.