I’ve been chomping at the bit for this one. Of all the new All-New Marvel Now number ones, Ghost Rider is the one that I’ve most been looking forward to. Why? It’s hard for me to say for sure, but I’ve been waiting for a long time for a Ghost Rider story that lives up to the striking visual of the character. I’m not one to be bothered by the new design, by a new lost soul behind the wheel, or even by the change in vehicle type as long as the story is good. So the question remains, “Did All-New Ghost Rider deliver a solid story and a cool new direction for the character?” Unfortunately, there just isn’t an easy answer for that yet. 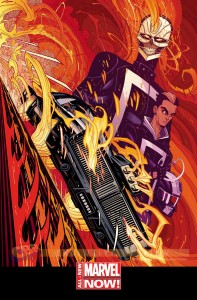 Now, don’t get me wrong, all of the pieces are in place to make this the coolest new Marvel title of 2014. The problem is that the book is over before it really gets a chance to get interesting. The story starts in a body shop in East L.A. where Robbie Reyes is putting the finishing touches on the badass street machine that will soon become his companion in hell-bent vengeance. He gets sent home for the day by the shop owner due to lack of work and we immediately get the sense that money is an issue for young Robbie. We soon find out why as we are introduced to his little brother, Gabe, who needs a wheel chair and seems like he may be developmentally disabled. Robbie and Gabe live alone in a very scary neighborhood, and there is no mention of parents or family. After Robbie tucks Gabe into bed he leaves to steal the muscle car of destiny and take it street racing. Fortunately, the creators do their best here to keep the whole thing from looking like a scene out of The Fast and The Furious, and I think they do a pretty good job. Robbie wins the race but is caught by the cops, and probably the best moment in the whole book is his genuine panic over what will happen to his brother, told in flashes across the page. This is the moment when Robbie becomes a character that I want to follow. In won’t spoil the rest, but the last few pages of the book involve Robbie becoming the Spirit of Vengeance and riding off into the night.

I really liked this issue, from the writing to the art to the colors, but I needed more. The only consolation I have is that it looks like we will get issue two in two weeks instead of a full month, but since issue one was on a lot of lists for last week, I’m not sure how much I can trust that. Of course, it can hardly be called a flaw that I want more of a book, but I feel like this one may have been better served an an oversized issue  so that we could get to know this character a bit more right away. As it stands, All-New Ghost Rider takes a lot of great first steps, and I will definitely check out issue two to see where those steps land.

The art and colors in Ghost Rider are better than I could have expected. I’d seen the promos, but the pages themselves put all the rest of that to shame. Tradd Moore’s manga-inspired style is so much fun to look at that I found myself flipping through the book several times just to check out the panels again and again. And this is really why the story seems so short: Moore was given several whole pages and double-page spreads of nothing but art to play with, and he does an absolutely beautiful job. The street race scene in particular reminded me more of an episode of Speed Racer than the more obvious Fast and Furious comparison, which can only be a good thing. But, Tradd’s quiet scenes are just as affecting as his splash pages. I was also quite impressed with the backgrounds, which paint a seemingly genuine picture of East L.A.

Moore’s art would not have nearly as much life, however, without the absolutely superb colors of Val Staples and Nelson Daniel. Most of the book takes on a cooler color palette while still keeping the L.A. stucco and brick. But, with each passing page, as the Rider approaches, we get a little bit more red or orange in a panel here or there until finally he bursts onto the scene as a raging inferno. It’s a wonderfully striking contrast that is very well utilized throughout this first issue.

Buy it. Maybe there is an element of “wait and see” here that should be exercised since, as I said, the book felt short and light on story. But the art is so cool that I really think it needs to be seen to be believed. Unfortunately, that’s kind of always been the problem with the Ghost Rider: the story so often doesn’t live up to that iconic look. However, I believe that this book has the potential, based on the groundwork laid in this first issue, for the story to overtake the art in the race to readers hearts. Check it out and see for yourself.