***WARNING: In order to honestly review this book, I need to enter the realm of spoilers. “The Verdict” will be spoiler free if you want to scroll down.***

The end is near, and the inevitable return of Peter Parker is close at hand.  It was announced some time ago that issue #30 of Superior Spider-Man would be the final issue of the Superior Spider-Man. However, in typical Dan Slott misdirection we now know that this is not entirely true. Perhaps it is just Slott channeling his inner Ben Kenobi, because from a certain point of view no lies were told. 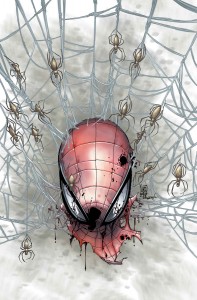 At first I was a little bummed out that we were not getting the final conclusion to the series until next issue. Although after reading through issue #30 I wasn’t left feeling upset that we still had one issue to go, because Slott delivered on his promise. The Superior Spider-Man as we knew him has left the building, and the truly Superior Spider-Man has returned.

Before I delve into the depths of the story, let’s take a moment and talk about the art. The entire art team has been kicking some serious ass since the “Goblin Nation” story line started back in issue #27. I personally enjoy Camuncoli’s style and aesthetic as he was on art when I started regularly reading Amazing Spider-Man almost two years ago. The final one page spread stirred up some nostalgia of the classic Romita Sr. Spidey, and had me pumped up thinking, “Hell, yeah! Let’s do this!”

For the past several issues Slott and Gage were building up to an inevitable rematch in the mindscape between Otto and Peter, but instead of repeating what has already been done, they quickly dropped the issue out of fifth gear and into second. The sudden shift from heavy action to a rather emotional turn is somewhat jarring at first. However, it works. It allows us readers to feel what Peter must’ve been thinking as well. (Wait, what? We are doing this without a fight?) It also serves as a testament to how far Otto has evolved over the course of his run, particularly in the past few issues. Otto may have been the superior tactician and planner, but his heavy reliance on fear and technology made him blind to his instincts.

Peter clearly states in the issue that heroes need to act on their instincts to do what is right, despite giving up a tactical advantage. It is in these moments that Otto becomes aware that he is not as superior as he once thought he was, and even wonders what Parker would do. His doubt in his abilities and actions bring the series full circle back to Amazing Spider-Man #700. Otto first made the decision to become a hero based on memories he had of Peter Parker’s life. He tried to live up to and become a better hero that Peter ever was. In the end the memory of Peter Parker rose up causing Otto to think about who he had become and who he needed to be.

Slott has taken us on a pretty incredible ride this past year, and I hope that the naysayers have come around. Slott has shown us that even though Peter Parker may have been gone his influence was never truly absent. Otto was able to find love and ultimately his redemption, through his time as Peter Parker and the Superior Spider-Man (albeit it is a little skeezy, if you think about it too much).

This is the penultimate issue to one of the largest-scale and controversial Spider-Man stories ever told. This is a must buy for any fan of Spider-Man, regardless if you are a fan of Otto as Spidey or not. If you have been a naysayer from the start, then just go to your local shop and stare at the last page. How the events play out may come as a shock for some, but the bread crumbs have all been leading up to this. It is going to be extremely interesting to see how Slott ties everything up next issue.