Magnus: Robot Fighter has been around since the 60’s, originally published by Gold Key Comics. In all that time–and despite my best efforts–I had never had the chance to really get into a Magnus story. I had a couple of issues here and there, I think from when Valiant was publishing it in the 90s, but they were in the middle of arcs that I didn’t understand. So now, with Dynamite comics bringing back several of the Gold Key heroes, I finally get a chance. And after reading the first issue, I plan to take full advantage of the rest of the series as it happens. 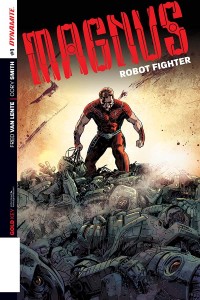 The story begins in the town of Maruy’s Peak, somewhere in the Rockies I believe. The world is a sepia toned paradise of middle American, small town bliss. Russell Magnus is a school teacher and martial arts instructor in town, married to a nice girl, and about to have a family. According to a calendar on the wall, it’s November, 2045. The only thing to indicate that this is the future is the presence of robots. Magnus’s class uses a sparring bot for fighting, another robot pushes a wheelchair bound woman down the street, Magnus’s wife repairs robots for a living. And, as we come to find out, Magnus himself was raised by a robot. All of this unfolds peacefully enough until one day when the town comes under attack. Russell is out fishing with his “dad” and is cut off from town. Suddenly, a robot appears in front of him, accuses him of violations to a “code of humanities” and whisks him off to somewhere else. He appears in a full-color world where he is being hunted by men and robots in uniforms. After a narrow escape, he emerges into a much different world than the one he left, complete with flying cars and huge, neon-lit buildings. He realizes also that the robots here are more prevalent, and some even look human. He also seems to have a sort of second sight when it comes to robots, being able to spot weaknesses and see through disguises. After struggling with more ‘bots who want to detain him, Magnus finally encounters a real human, only to be knocked out cold by her.

I’m a fan of writer Fred Van Lente, and this is some of the best I’ve read from him. I’m still a little confused as to the transition between life on Maury’s Peak and life in the big scary city, but I think that’s intentional. Hopefully, we will find out very soon what exactly happened to Russell Magnus and whether he will be able to regain the life he seems to have lost.

Cory Smith’s art here is pretty great right up until you get to the high action scenes later in the book. For whatever reason, once the fighting starts the backgrounds disappear and the subtle expressions that have been prevalent throughout the book fade in favor of Magnus’s over-exaggerated rage face. I’m hoping that this will improve over the course of the title as the rest of the book is quite good. Kudos to Mauricio Wallace for the excellent colors in this first issue as the subtle sepia in the first half is pitch perfect for the story.

Buy it. I hadn’t really been paying attention to Dynamite’s Gold Key revival before now as I’ve never been a Turok fan, but with as good as Magnus was, I’m getting excited. I’m just hoping Solar is up to snuff. Magus, however, has been officially added to my pulllist and I’m looking forward to seeing how it shapes up. For more on the Gold Key books, check out the letter from editor Nate Cosby in the back of the issue.