Sometimes it can be hard to describe what it is exactly that makes the comic book such a fascinating and engrossing storytelling medium.  A lot of it has to do with the interaction between the art and the narrative/dialogue.  It’s a magical feeling when these two areas gel together, because it causes our brains to create something cinematic in our minds.  When these two components are at odds, however, it can greatly hinder the story that’s trying to be told.  In The Bunker #1 by writer Joshua Hale Fialkov and artist Joe Infurnari, we see some of the problems that can emerge when these two aren’t quite in sync.  It’s still a fantastic read with a beautiful and distinctive look to it, but this clash bogs it down. 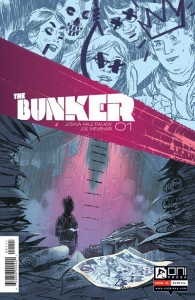 The Bunker is one of those books that immediately makes you feel both amazed at its intricate plotting and thankful that you weren’t the person who had to weave all those threads into the complex tapestry that it is.  It is the story of five friends enjoying a weekend at a cottage when, during a trek through the woods in search of a place to bury a time capsule, they stumble upon a mysterious underground bunker.  Inside they find boxes and boxes full of documents that are supposedly from the future along with letters from their future-selves warning of a disaster on the horizon that will end humanity.  And the ones responsible for what will happen are the friends themselves.  As they try to come to grips with the situation and the roles they supposedly play in it, the relationships between the five quickly begin to mutate.

As said before, the plot of The Bunker is pretty complex, thanks largely to the jumps back and forth between timelines.  As a result, there are moments where you feel like you’re holding on desperately to your understanding of what is happening, kind of like riding a mental rollercoaster.  What saves this from getting irritating are the richly fleshed out characters and group dynamic.  Very soon you start to feel invested in the stories of these well-intentioned young people, and it makes all the timeline jumps feel exhilarating rather than tiresome.

From an art standpoint, Joe Infurnari’s work is a bit of a double-edged sword.  It’s incredibly atmospheric, thanks in part to his subtle coloring style, capturing a dank claustrophobic feeling that quickly defines the look of the book.  However, at times his unpolished, rough-around-the-edges art style has a tendency to cause confusion during certain scenes, and this is where a few of the aforementioned problems in The Bunker arise.  When you’re dealing with subject matter like time travel and flashbacks (or rather flashforwards) it needs to be communicated clearly who is taking part in a scene, and that isn’t always the case in this issue.  This results in having to flip back a few pages in order to piece together what exactly is happening and to whom, which can get a tad frustrating at times. Overall, though, Infurnari’s art (especially his composition of many of the panels) is very imaginative and distinctive.  It’s hard to imagine this title without him.

Buy It – If you enjoy stories that explore the concepts of destiny and time travel, The Bunker should be right up your alley.  Featuring well thought-out characters who feel both real and relatable, it’s a complex yarn that will leave you eager for more – despite its tendency to at times be hard to follow.