In the comics business, it’s not uncommon to take a failing series and cancel it, only to resurrect the same or similar series with new creators and a new #1 issue. It’s old hat–not unlike changing the oil in your car. But it seems like there are some of these titles, teams, ideas, etc. that are just destined to fail over and over again, regardless of the talent behind them. In my opinion, X-Force is one such title. Uncanny X-Force enjoyed some success under Rick Remender from 2010 to 2012, but since then the mutant team, whether under the Uncanny or the Cable and… title, just hasn’t been able to catch on. And, unfortunately, the All-New Marvel Now X-Force #1 slides even farther down the spiral that began at the end of Remender’s run on the series over a year ago. 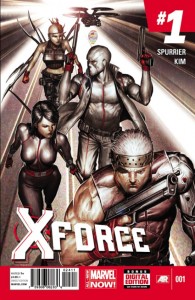 I like Si Spurrier’s writing, so believe me when I say that X-Force #1 was difficult, almost painful, to read. If the issue was just bad, that would be one thing, but there are ideas here–snippets of something that could be worth pursuing–that just can’t shine through all of the muck. Unlike some of the opinions that I’ve read, I actually liked Marrow’s internal monologue–how she compares the rising action in the issue to a song. However, her dialog has trouble getting out of it’s own way. But, her’s is not the worst dialog in the issue. That privilege belongs to Fantomex, whose occasional French turn of phrase becomes a bad Gambit impression under Spurrier’s pen. Even Gambit himself has moved past the PePe Le Pew routine, but here it is, resurrected to the detriment of the character and the entire issue. I also found it frustrating that there were several aspects of the book that were not friendly to new readers. I haven’t read any of the X-Force titles since the first issues of the last series, and I found myself lost on too many of this book’s details. What could have been a fascinating story about building a mutant nation and the lengths to which these characters would go to secure that dream becomes a lot of poorly timed jokes and misplaced sexual tension.

As wrong-headed as the story is, however, the art is where the book really fell apart for me. Rock-He Kim’s art can be seen on the regular cover as it is throughout the book, and while the steel gray and red, digitally painted style is cool on a cover, it gets exhausting after a while on the interior. What’s worse is that the panel composition is often very boring and some panels are just poorly drawn. The way that the drawings are colored sometimes succeeds in masking misproportioned figures and expressionless faces, but not always. Finally, because the colors are so dark and the faces so dead, any attempt by Spurrier to create humor in the story just doesn’t ring right. It’s like Sylvester Stallone trying to do stand-up.

Skip it. It pains me to say this, but X-Force just can’t cut the mustard. While there are fleeting wisps of ideas presented in the issue that could one day redeem it, I don’t see that day being anytime soon. The characters are more like caricatures, the plot itself nothing to write home about, and the art a misfired distraction. I can only hope for the sake of the X-Force name that the next iteration has a little more to offer.