I’m a pretty die hard Firefly fan, just so that we’re clear. I am not, however, so die hard that I cannot admit that the subsequent film, Serenity, didn’t have a couple of problems. I don’t hate it like some fans do, but I won’t necessarily defend it, either. I say all of this so that you know where I’m coming from when I tell you that the story in just the first issue of Leaves on the Wind makes Serenity worthwhile. Zach Whedon has brought back the crew of Serenity for me and made this world fun and fascinating again. 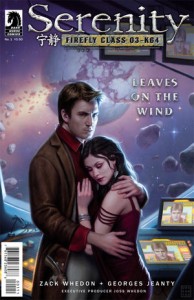 The story takes place about eight months after the end of the film. Every one in the ‘verse is looking for the people responsible for the broadwave about Miranda, from the Alliance itself to a new resistance movement. Malcolm Reynolds and his crew, however, are hiding-out on the far side of nowhere. And remember, this is the crew after the events of the film: River is flying the ship, Zoe is pregnant, Jayne has left, Simon and Kaylee are hooking up all over the place, and another relationship has developed that we’ve all been waiting years to see. It’s the same characters but a very different landscape. And by the end of just this first issue a favorite Firefly villain returns and a crew member is in mortal danger. I cannot wait until issue #2.

Zach Whedon does a great job with the voices in this issue. When I read Mal’s dialog I can hear Nathan Fillion’s semi-southern cadence. Not only does each character sound different, but each character sounds faithful to what we’ve come to expect. What I was most impressed with, however, is that a good amount of the exposition in the issue is handled through a newscast–a trope I’ve come to hate–and yet it not only works, but serves to provide a little commentary on the state of current news media.

Art for a project like this can be tricky. You have to make the characters look reasonably like their real-life counterparts, but too much or too little can kill the mood of the story. For the most part, I found the art to work just fine. There were many more moments where characters found that certain twinkle that made them look genuine than there were the opposite. The excellent colors in the issue helped to sell the world as well.

Buy it. I was a little afraid going into this series that I would be lost because I haven’t kept up on theFirefly comics, but that was not the case. All you need to get into this is knowledge of the Serenity film, though you will get more of a kick out of the issue if you also know the show. Fans will find a lot to love here, as I did, and I hope we can even pick up a few converts along the way.