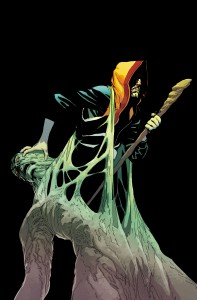 There are a ton of great books out there right now, and unfortunately I do not have the time (or money) to read every last single comic that comes out. Since this is MY “Best of” list, I’m picking from those that surprised me, knocked my socks off, or when my eyes were starting to look away from a series, they slapped me in the face and said, “Look at this!”

Adventures of Superman has brought us a lot of great Superman stories this year. It is something that the fans have been missing a lot in the new-52. It has been great to see the classic Superman that inspires and reminds us of what it means to be human.

The series as a whole suffers from some inconsistencies, but issue #18 of Batman and Robin does what a comic should do; it was a story that you can only tell in a visual media. Without any dialog or thought bubbles we were given an incredibly emotional story told purely through the art.

Slott’s Superior Spider-Man is loved and hated by many. I’m in the love camp. This book is the first one I read every time it is released. It is not without its flaws, but it is bringing an incredibly fresh take on Spider-Man. There was almost a cyclical nature of the events in Peter Parker’s life, but Octavius is taking steps to put “Peter Parker” on a path he never went down before. It reminds me a little of Robert Frost. “I took the one less traveled by, and that has made all the difference.”

Green Arrow was a character and title that had never really grabbed my interest. Lemire’s run this year was nothing short of phenomenal, and even with bulls*** ties being forced by editorial for “Forever Evil” and “Zero Year” the pace never stopped. Lemire is building on the lore of the character and really working to draw us readers deeper into the mythos. Sorrentino’s art has been stunning, and has worked well with the series. The Count Vertigo issues in particular were mesmerizing. This is one of the few remaining DC titles left on my pull list, and it is phenomenal.

Brubaker and Epting’s new spy thriller caught me by surprise. I had completely forgotten it was coming, but the two issues we got at the end of 2013 blew me away. Epting’s art was probably my favorite of the year in any book. I love the throwback to old 1960s spy stories that Brubaker is bringing. Don’t be too surprised if this book shows up on some best of 2014 list in about a year.

The grand scale and magnitude of the work Hickman did setting up “Infinity” was nothing short of amazing. Hickman has proved time and time again that he plays the long game with his storytelling, and it pays off. I was losing faith in comic events, but “Infinity” impressed the hell out of me.

I didn’t start reading Locke & Key until 2013, so as a whole it really stands out for me. We got to see characters grow and develop, and Hill and Rodriguez delivered an ending that was very satisfying. There are a number of great series out there that putter out towards the end, but Locke and Key is not one of them.

Hawkeye continued to impress throughout 2013. The Pizza Dog centered issue (#11) was one of my favorite single issues of the year. The series continues to put characters first. Even with all of the humor that is flung around, there are still those genuine emotional moments.

Valiant really fell into stride in 2013. They released the much anticipated Quantum and Woody and finished up there first crossover event in Harbinger Wars. In such a short amount of time they have created a deep, immersive world. Each title stands strong on its own, but there is an interconnectivity that means consequences for the entire world. This is what I love about Valiant (and the same reasons, I went from a lifetime DC fan to a Marvel fan boy).

Despite Valiant and Marvel rating as my favorite publishers, it is a DC book that is my number one pick of 2013. Snyder had a pretty good run on the series, but it really started to dip towards the end of “Rotworld.” The relatively unknown Charles Soule took the reins and has turned Swamp Thing into an incredible series. I have yet to be disappointed by an issue, and each issue gets better and better.