The first four issues of FBP were all-out, pedal-to-the-metal storytelling. Simon Oliver and company didn’t ease their readers into this world of rogue physics–they threw them into the deep end without a live vest. By issue five, when lead character Adam Hardy went out into the country on sabbatical, the story slowed down to give readers a chance to catch up. Issues six and seven feature a much smaller story, a new recruit, a dying bureau, and a routine time dilation investigation. The pace of the series overall has been brilliant–not only introducing the world in the heat of battle but knowing when to take the time to allow the reader to take a breath and process what they’ve seen and heard. And now the story is primed and ready to take off again in the coming issues. 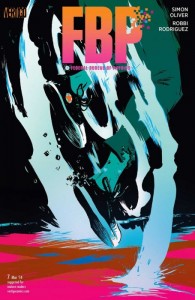 Issue #7 is the second and last in the short story about the new recruit, Rosa Reyes. We find out more about her past, how she came to be what she is, and the lengths to which she is willing to go to dispense justice. It’s an interesting character study that also allows us to get the new lay of the land now that physics protection has been privatized as well get our bearings with Adam and the mystery with his father. It seems like a lot to cover, but these characters inhabit this world so well that it all just sort of happens and doesn’t feel crowded.

Robbi Rodriguez is as much an integral part of FBP as Simon Oliver, the characters themselves, and the paper the book is printed on. His sketchy, fluid, spiraling style gives the book an unhinged feeling, like the rules of the world could just come apart at any moment. And yet, his consistency also anchors the book in the world he and Oliver have created. I’ve spoken a lot about “the world” of FBP in this review and it’s because this is a scenario where establishing the rules by which the story operates is absolutely essential to the success of the series. Funny enough, the art of FBP does as much to establish those rules as the writing does.

Buy it. Even if you missed the first major arc of FBP, these last two issues will get you ready for the next big one arc, which should be coming soon. This series is nearly perfect in how it’s assembled, and it’s assembled to go for the long haul. This could be the next great Vertigo series, and now is the time to get in and see it forward.