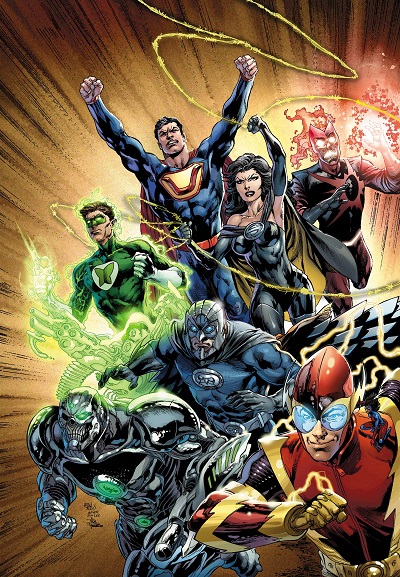 DC’s Forever Evil event is standing on the edge of a cliff.  One false step and it will fall screaming into a bottomless cavern of ho-hum overdone super-villainy.  Thankfully, though, it hasn’t reached that point just yet.  Instead, Geoff Johns has been giving us one of the best DC events in a long while, filled with the right mixture of evil mustache-twirling melodrama, clever role reversals, and heart-pumping action to make this a very addictive read.  Johns continues this streak with Justice League #24, which gives us some insight into the origin of the Crime Syndicate’s leader Ultraman.

Opening with the familiar scene of Krypton on the edge of destruction, we soon realize that this is an alternate version of the doomed planet, one that was home to the child that would grow up to become Ultraman.  From there, we follow Superman’s devious doppelganger as he makes his way to Khandaq to end a rebellion against his forces, stopping along the way to settle some business at the Daily Planet.

This Forever Evil tie-in is a perfect example of how Geoff Johns has managed to crank up the “evil-dial” to absurd levels without pushing it too far.  Just when things start to feel like they’re getting too gritty or uncomfortable, we’re treated to a goofily dark image like a steely-eyed baby Clark emerging from his freshly-landed rocket and announcing “you will be my parents now” to a cowering Ma and Pa Kent.

What’s also refreshing about this issue is that, though it is an origin story for Ultraman, it doesn’t fall into the same trap that many of the “Villain’s Month” stories did.  It gives enough background to let you in on why his mind is so scarred, but also pushes the event’s story forward.  Rather than pay lip-service to the main narrative, it feels like another issue of Forever Evil rather than a side story.

Visually, there are some pretty stunning moments in this issue thanks to Ivan Reis.  There have been times in the past where his work has felt slightly frayed or rushed, but this issue boasts a crispness and confidence that makes it rank among some of his best efforts.  The scene in the Daily Planet especially is pretty chilling stuff that reminds us just how scary it would be to come face-to-face with a pissed off and morally deficient Kryptonian.

Grab It – Justice League #24 is a devilishly fun read that furthers the arc’s plot while also showing us a bit of what makes Ultraman tick.  If you’ve been digging Forever Evil and want a solid tie-in, this is one of them.