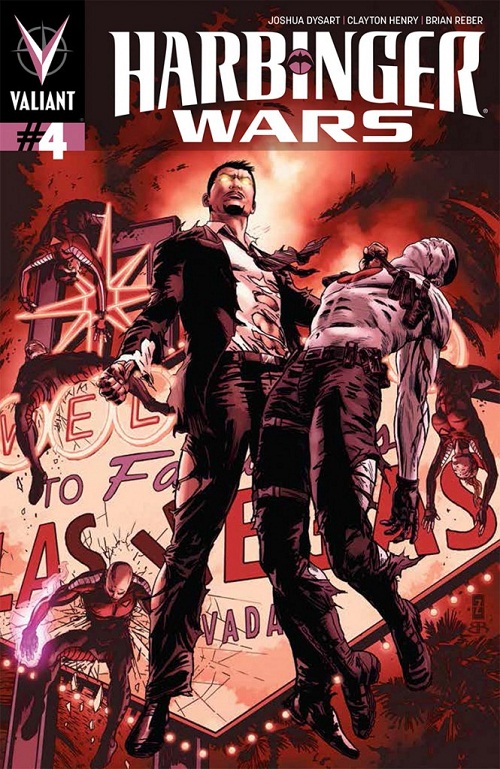 This week’s issue of Harbinger Wars is the finale of Valiant’s first big crossover event. The final issue doesn’t disappoint and concludes with one last hurrah of crazy and all the action and explosions one would expect from a summer blockbuster motion picture.

My disappointments with the mini-series are minimal at best, and are more the same gripes I have with most comic book events. Events wrap up in a way, but there are still threads left that aren’t tied up to put a nice bow on top of the event.

At the center of this event was Generation Zero; the group of escaped Project Rising Spirit psyiots. This chapter of their story feels complete as they take a step out into the larger world of Valiant. This focus on a new team of characters helped to mostly keep this a self-contained event. Harbinger and Bloodshot do tie-in, but they didn’t feel like necessities to enjoying the mini-series. Although it would have been nice to also wrap up Stanchek and the Renegades, and Bloodshot’s stories here, we’ll get to see those play out in some sort of epilogue in their own titles.

The event did bring the fun, and some changes to the status quo and spectrum of this corner of the Valiant Universe. This event has definitely set both Harbinger and Bloodshot on new paths that open things to even more possibilities, while adding to the history and mythos of this world. This is what a lot of events are setup to do, and Harbinger Wars accomplished what it set out to do.

The art ties everything together by creating a nice pace that steadily delivers action and provides explosions and gun fights in all the right places. The constant of colorist Brian Reber unites the slightly varying art styles with his consistency throughout the event. The vibrance and brightness lends itself to creating an atmosphere that draws the reader in and keeps them on their toes. I read a lot of comics on the morning commute to work, and Harbinger Wars works just as well as a cup of coffee.

Pick up the whole mini-series. Harbinger Wars is what a lot of events need to be like. It’s not excessively long, so it’s light on the wallet. Tie-ins aren’t a necessity, and the event acts as a gateway into the related series as well as to the larger Valiant Universe. It is chock full of action, great art, and just a great way to kill a Sunday afternoon.