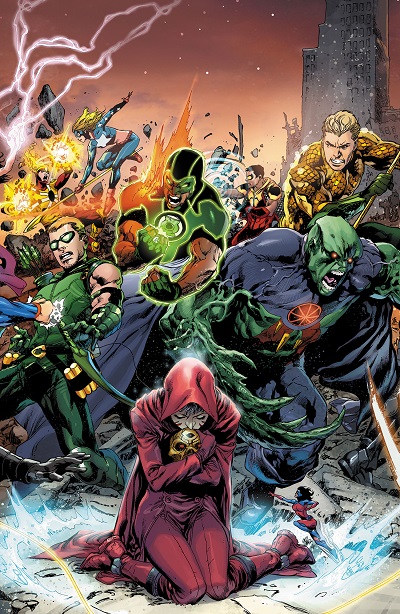 After a fun and exciting start to this summer’s Trinity War event kicked off last week in Justice League #22, these eyes were eager to see if the folks at DC could succeed where so many recent events have failed; by continuing to build on the momentum they had established.  And while the action is ratcheted down by the end of this particular issue, the steady build in the story, inter-character tension, and mystery departments of this crossover look like they are just beginning to ramp up.

War has erupted between the rival teams of the Justice League and the Justice League of America after an ‘out of control’ Superman allegedly killed a JLA member in the conflict.  A titanic struggle quickly breaks out, but sanity is restored shortly afterwards, leaving the Man of Steel’s allies desperately seeking a way to prove his innocence in the situation.  As Superman tries to come to grips with what has happened, Batman takes a pragmatic route to solve the mystery, leaving Wonder Woman to seek a more ‘mystical’ catalyst for his actions.  But another individual is also seeking to shine a light on this event; a person that only seeks to answer the questions that swirl around this mystery in order to get one step closer to solving their own.

With the vast majority of the pieces in place after last week’s Justice League #22, JLA #6 successfully takes the large cast present and does what needed to be done; creates more melodrama from their interactions.  It’s a heavy read, with so many angles of approach being explored as the members of both teams follow their own paths in responding to this crisis, but it is ultimately fulfilling as a solid second chapter in the overall story.  There does seem to be a minor hiccup in continuity comparing the history lesson given here versus the one shown in Pandora #1, but it is a small quibble in the face of the sheer magnitude of things that were done right by interweaving all of these titles together.  Most notable in that ‘done right’ category are the characterizations of all of these various individuals.  Each has their own personal motivations and methods for responding as they do, and it leads to a natural feeling of separation as each follows their personal methodology to solve the quandary before them.  Of course, Amanda Waller is there to take advantage of this, adding even more subterfuge and layers to the puzzle as only she can do, but together each faction brings a vital piece of the whole story with them in this chapter to entertaining effect.

All of this is delivered in beautiful fashion via the pencils of Doug Mahnke.  No stranger to large-scale battles after working alongside Johns in the Green Lantern mythos, it is actually the quieter moments where he really excels in this particular issues.  There are serious conversations being had between the characters, each with their own personal driving factors as stated above, and Mahnke is able to visually capture these differing opinions in the facial expressions and postures of the characters.  It seems like a small thing, but in this particular issue, everything hinges on selling those moments; and it is something he is able to do splendidly.  There is some minor inconsistencies throughout the book as a whole though, but I think that has more to do with inkers for various pages more than a lack of consistency.  It’s incredibly small (did not stand out until my second read through), but it is noticeable for those who are looking for that steady style throughout.  This is a small price for the visually compelling story-telling that Mahnke is able to bring in this chapter though.

Trinity War continues to hold steady on the good side of the crossover fence, so I give this one a solid buy!  Alleviating fears of this being a hero versus hero slug-fest before it can really turn into such, JLA #6 puts the crux of the story back on the shoulders of the characters themselves to entertaining effect.  Of course, we’ll keep a close eye on it here at Talking Comics as the story and our coverage continues next week in Justice League Dark #22 and Constantine #5.