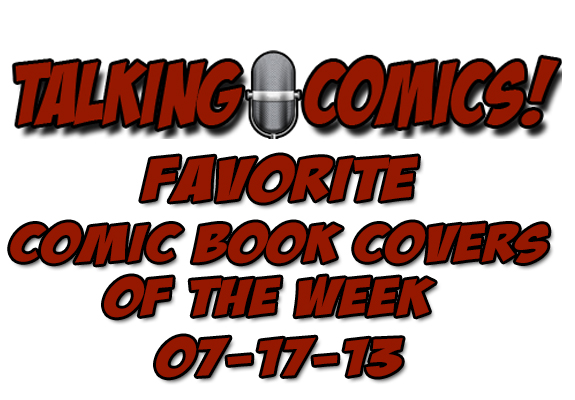 “In honor of this hot ass Summer season my favorite cover this week features the Future Foundation cutting loose by having some fun in the sun. I can’t even imagine how much fun it would be to travel to the beach with this crew … not to mention getting the chance to see She-Hulk in a bikini! Yowza!” – Steve Seigh

“What says Summer more than a pool party, unless it’s this fabulous cover by the Allreds! The first time I saw this, I burst out in an ear-to-ear grin! I love how Bentley is being his usual grumpy self, not to mention that I adore the image of Tong in a pink bikini!” – Bob Reyer “This cover is just beautiful. It’s as simple as that. No elaborate explanation necessary. It’s all about the love and black on green colorization.” – Steve Seigh “Hulk is reminding me that if I don’t pick up Avengers and get caught up that he’ll very likely come to my house and beat my ass down. I love the darkness of this cover. I would seriously not want to mess around with The Hulk on any given day, but especially if he looks to be having a day like the one featured on this cover.” – Steve Seigh “Women. They’ll drive you crazy. Am I right? Eh? Ha ha! I keed. I keed. Not really, y’all can be pretty maddening at times. I love you.“ – Steve Seigh “Of course Ben Franklin was a Skrull, how could he have come up with so much stuff! I have my suspicions about Tesla and Edison, too! (and while I’m speculating, and don’t tell anyone that I said this, but as our Stephanie manages to be so many things in so many places…I’m just saying.–hmmm!!)“ – Bob Reyer “As the “Enemy Within” event begins to draw to a close, Carol Danvers’ desire to be a great hero intensifies, as evidenced by her look of grim determination on this “Last Man Standing”cover by Joe Quinones.” – Bob Reyer “I will refrain from making any “Holy…” jokes, but this cover by the Allreds does put me in a nostalgic frame of mind. What great likenesses of the heroes and villains; it’s as if I’m 10-years-old again, spread out on the living room floor in front of our B&W Motorola!” – Bob Reyer

“Despite all the fine artists contributing covers to this first issue, I’m craving this playful one by Stephanie Buscema! I don’t know if I’ll be able to snag one of these, but I’ll be in there pitching!” – Bob Reyer “This one really stood out to me, especially since we recently discovered which of Fantomex’s selves loves Psylocke. I hope this cover accurately portrays what’s going to happen in this issue.” – Mara Whiteside “Using a simple yet stylized cover to show Supergirl’s current entanglement with the Cyborg Superman, its sharp angles and stark background really make it stand out in comparison to a lot of its contemporaries this week!” – Sean Lamont

This list was compiled while listening to the album Pipe Dreams by the band Whirr. You can listen to the entire album via the link featured below. Enjoy!