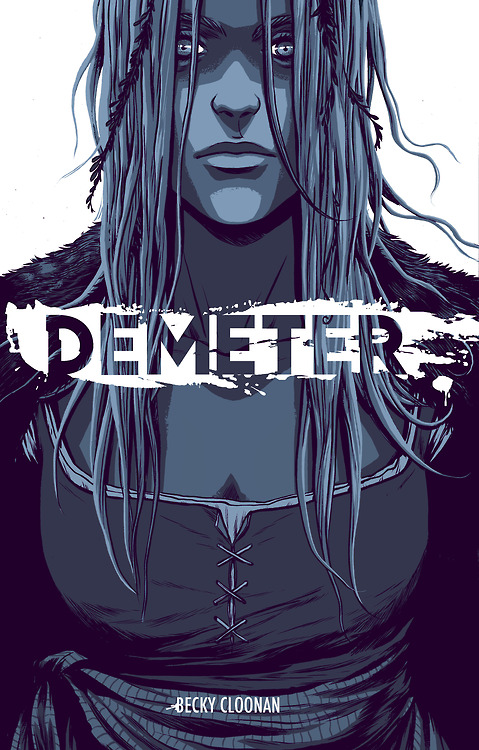 Despite it’s name being derived from the Greek goddess of the harvest, Demeter, Becky Cloonan’s mini-comic which debuted at TCAF last weekend, really has very little to do with the presence of higher beings. Instead it’s the story of two lovers who have been torn apart by the sea. After one lover, Anna, makes a deal with the ocean, her Colin is returned to her, but not before the ocean names its price.

Demeter is a short story that’s written and illustrated by Cloonan and is the second mini after The Mire, which gained much praise from critics and fans alike. Demeter is a simple story that makes its mark and stays with you after you’ve finished it. The story won’t take you more than 15-20 minutes to get through but that allows you so much more time to go back and read it through again and again.

The story may be short, but that doesn’t take away from the beauty of it. Even if there were no words to coincide with it, Cloonan would do a pretty damn good job of telling the story without them. The images are all in black and white but her anime-ish style and attention to detail draw your eyes, and your being right into the book. It makes Demeter feel like the book you’ve been waiting to read.

The narrative is reminiscent of old tales of wives waiting for their fishermen husbands to come home from trips out to sea, but with a supernatural twist. I feel like the supernatural element is always implied in those stories but never really comes to fruition. Cloonan’s tale takes those dark turns and does a wonderful job of exploring, albeit briefly, one such “ghost” story.

VERDICT:
This is a must buy. I’m not sure if it’ll be available at any of your local comic book shops but I would keep an eye out for it. Certain stores tend to bring in sketchbooks, mini-comics and such if they can score them at conventions, so ask around. This is a brand-new comic though and if you aren’t going to be at a show to buy it directly from Becky Cloonan, you’ll likely to be able to pick it up from her online store in the near future.