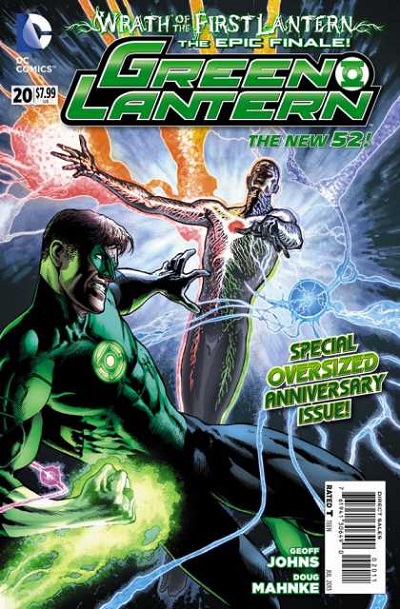 There are few things greater in life than leaving your mark upon the world.  We all strive to do it in our own ways, and everyone succeeds in rippling the water around them in some fashion.  So I have to wonder, what can be more glorious for a creator who specializes in a field known for its illusion of change, static natures, and neverending stories; than to walk away from a property with the knowledge that you have fundamentally altered and essentially defined its very existence for an entire generation through your efforts?  Well, after reading Geoff Johns’ final issue in his multi-year epic on Green Lantern, I believe I have the answer to that question.  You do the unthinkable in this medium.  You give the readers an ending.

Everything in the Green Lantern Universe has converged to this one moment in time, as the masses of assorted Lanterns meet on the field of battle over Oa to confront a threat larger than they can take on alone: The First Lantern.  But as has been seen over the years, their conflicting ideologies do not allow them to play well together, so can these disparate forces set aside their differences long enough to overcome the god-like Volthoom?  And what ulterior motives drive these individuals even if they should prevail.  Lanterns of every color, characters from throughout the years of the run, entities returning, and the deaths of historical importance; this is the final chapter of the Johns era of Green Lantern.

Even weighing in at a whopping 60 pages, this issue is straining at the seams to contain everything it wants to convey as this saga draws to a close.  Reading more like an entire event inside the covers of a single issue, this is exactly what I was looking forward to after going back and reading the previous crossovers that had proven to be benchmarks throughout the run.  As it sweeps across larger-than-life battlefields, practically every story thread that has been woven in since the new volume started (as well as many from the previous) comes to a natural conclusion that feels as grand in scope as it should be, while still punching you in the gut through its smaller personal story of two individuals who have been at the core of the entire run.  And as always, the ramifications are far-reaching and not shied away from; helping immensely to set the stage for the future tales to be told as Robert Venditti takes over the title next month.

While the aftermath and story seeds planted in this issue lead to a multitude of questions and intrigue for the following run, what this issue provides that surprised me the most was the hard ending it placed as its bookend.  Adding an epilogue for all of the characters they have tended for so long, there is a cinematic feel of contentment to this final chapter that sticks that oh-so-elusive landing by eschewing the standard open-ended lingering shot of our heroes staring off vigilantly into space; replacing it instead with a series of short vignettes that give you a brief look into what happens to those who survive well past their ring-slinging days.  It’s such a rarity to see in this field (for obvious reasons), and it left me setting down the book with the same feeling I get whenever I reach the natural ending of any good story (with plenty of landscape to cover in between); fulfilled, content, and happy I started out on the journey in the first place.  And really, what more can you ask for from an ending?

It’s hard to say anything new about the artistic team on Green Lantern (even with its Legion of Lantern-Creators this issue) that I have not praised before in the past.  Mahnke leaves the title on a high-note, providing his usual style of highly detailed epic battlefields that has become almost dangerously expected for someone like myself.  Where this final issue shines though, is in that same cinematic feel that I had mentioned earlier in the review.  He obviously utilized his time efficiently, relentlessly executing on iconic staged panels that draw you deeper into the conflict, make you want to throw your fist in the air, and even mope a little at the smaller individual tales of the people themselves.  Even with the army of artists putting their mark on the issue this final time around, there is little in the way of disjointedness, and it is clearly a Mahnke issue.  I will be curious as to where the series goes from here, because just as Johns has left his stamp on the title in the storyline, for myself the Green Lantern will always visually be married to his style after all of these years of excellent work.

Buy.  It’s a solid ending if you are a long-time fan, and with the brief recap at the beginning it is even an epic tale for a curious reader not too well-versed in the Green Lantern mythos.  I’ll admit I was a little worried the run was going to end on a fizzle after the crossover started to drag a bit in the middle, but I have been proven wrong yet again with this capstone issue to such a monumental run.  It has been nothing but a joy to read in the grand scheme of things, and the entire creative staff over at the Green Lantern family of books deserve to be credited for it.  So while I was a bit late to the party by joining in with the New 52, I can only be happy I got to be here for its close; and had they ever added a color for gratitude, I would be positively glowing in it.

Chapter 12: Red Lanterns #19 – If you’ve picked up the last three, this one is a buy.  As a chapter in the crossover series, it does not do much more than point them to the finale.

Chapter 13: Green Lantern #20 – The end; and it brings the entire event and the run itself to a satisfying close.  Definitely pick it up.