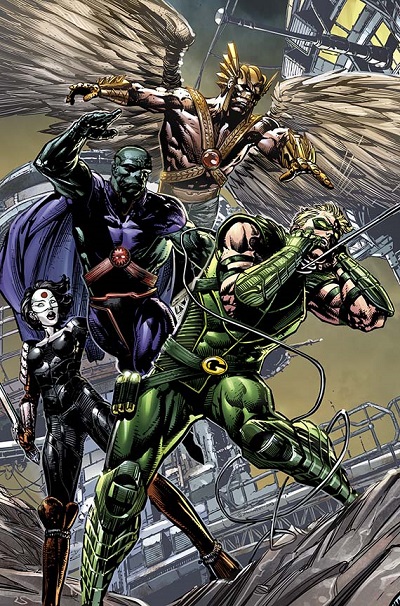 A funny thing has been happening quietly over in DC’s team books these last few months.  With the chore of introductions and establishing a foundation behind them, almost all of the major titles have been quickly shifting from dynamic set pieces full of iconic poses, over to melodramatic character-driven stories that focus more on the interactions of these team members as they work together to tackle those large threats.  It’s a welcome change for many, and if that is your cup of tea, no title at DC better represents that style of storytelling than Johns and Finch on Justice League of America; and they brought it to full effect with this week’s #3 issue.

Continuing their search for the Secret Society of super-villains that has started to expand its power base, the majority of the Justice League of America find themselves under assault by what appears to be the core members of the Justice League.  With the reveal that not all is as it seems, the team is forced to address the distrust that runs through its ranks; from the top down, to the bottom up, and even amongst each other.  But when their first plan meets with failure, it now falls to the least trustworthy among them to step up in a desperation move to find their well-hidden foe.  Not everyone is in on the plan though, causing more strife even as they find themselves the closest they have been to realizing their goals.

The biggest strength of this volume of the JLA is that these are all broken characters.  Their flaws, while clearly evident and practically defining in some cases, work as a catalyst to propel what is basically a simple investigation into a high-impact drama that spans the breadth of the DCU while keeping the focus tightly on these characters themselves.  Members rebel against the roles assigned to them by Amanda Waller, while others strongly disagree with the methods they take; but the book really shines when these conflicting ideologies are forced to not only acknowledge each other, but work together towards a common goal.  This provides a fun foil for all of these ‘second tier’ heroes as they interact, and really elevates their status within the title without taking them out of their core elements.  Needless to say, Johns is very comfortable in this arena of storytelling, and is obviously having fun playing with these characters as he delivers some of his stronger dialogue to date.

Finch’s art is gorgeous and stunning the majority of the time, but there are still a few places that the art can fall apart quickly with one errant panel.  Extremely detailed and heavy in shadow work, it conveys a tone of grim seriousness that does not play well with some of the lighter dialogue in places.  But when it works, it really works.  His action scenes are stunning, showing a mixture of brute force and graceful combat that is absolutely necessary to sell a team fight with a roster such as this.  And while I am not completely sold on the stylistic choices of his faces, when members are speaking to one another there is a clear indication of emotion behind the words being spoken.

Buy!  Those of you who have been waiting for the DCU to start getting back to dealing with the characters themselves instead of reinventing the wheel, this is aimed directly at you.  Fun at times, impactful on the universe as a whole, and filled to the brim with that melodrama goodness that we all love; Justice League of America looks to be spearheading the next step in this rebooted universe.