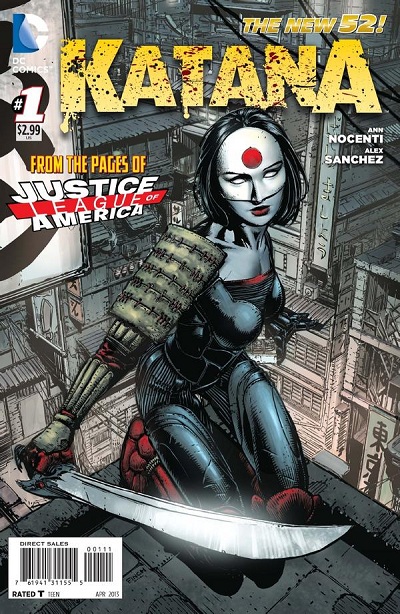 I’m torn on so many levels when it comes to this title.  On one side, I am elated to see DC taking such large risks and throwing B/C/D-list characters out there to see if there is any resonance while giving some context to these otherwise background team characters.  On the other hand, the pressure for these ‘lower tier’ books to knock it out of the park on the first issue is set at a laughably difficult bar to hit.  So, while Nocenti’s writing has not been directly aimed at my tastes in her previous work in the New 52, this is by far the work that shows the most potential and entertainment that I have had the opportunity to read.  But is it good enough to clear the hurdles this character faces out of the gate?

Set in Japantown, an ethnic section of San Francisco, the story follows Katana as she arrives seeking answers about the legendary sword she carries, Soultaker, and the history it has been a part of for centuries.  After building a base of operations, she goes off to check on her one lead, a young girl that has been ‘cursed’ with the history of the Sword Clan.  Katana’s stay is less than peaceful though, when an old enemy of hers arrives in Japantown as well, determined to find the young warrior and force her to see things his way.

Nocenti does a splendid job of ambiance in this inaugural issue.  Keeping Katana as a serious individual, but entirely aware of her own flaws, it instantly shows a potential for character growth that not many titles have from the first few pages.  Stylish in its delivery as well as its themes, she is also able to deliver a story that feels authentic in its cultural roots without succumbing to the all too easy pitfall of including items to show how culturally aware she is.  Where the issue struggles slightly though, is in its dialogue.  Greatly improved in my own opinion from her showings in Green Arrow and Catwoman, there are still quite a few lines that while not bad, just feel out of place within the context of the issue.  Easily overlooked, and it may even be a cognizant personality trait for the character on her own, but until I read more it just does not feel right in this introduction.

I have not had the pleasure to see much of Sanchez’s artwork in the past, but what he brings in this issue is a great way to introduce me to his work.  Light pencil work and shading combined with tapestry-like environments work in tandem to really give an authentic feel to a Japanese flavored setting.  While there were a few panels that left me pondering if the facial expressions were supposed to look the way they did, it is minimal in comparison to the overall flair he brings to the title.  Another item to point out is his excellent methods of bringing motion to the page.  Whether dealing with the single fluid motions of Katana herself or the controlled chaos of a ninja brawl, Sanchez has shown that he is more than proficient at making either situation feel natural.

A weak buy for me.  Overall, the book is a solid first issue.  Not amazing, but it does a great job of establishing the character and what her motives are from the get-go.  And for any A or B-list hero, that would be enough; but Katana is in a position that it has to dazzle readers from the beginning, and that is where the issue falls short.  It’s entirely unfair that it is held to a different set of standards, but in the current marketplace, that is the reality it faces.  So, while it looks to be a good start to a longer story, here is hoping it has the time to fully explore the directions it needs to excite readers and allow it to thrive as a unique and different setting within the DCU.