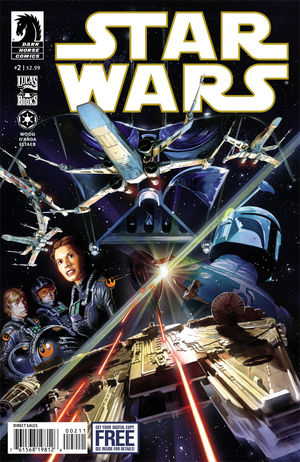 If there was any doubt about Wood’s take on Star Wars, issue #2 dispelled it. From the opening panel of Han relaxing in the cockpit of the Millennium Falcon to the final page’s glimpse of a familiar planet, Star Wars keeps readers in the well-known universe.

On their way to the Rebel rendezvous point, Han and Chewie have a run-in with imperial TIE fighters and Slave I. In issue one, there was hint of a spy within Rebel forces. The fact that Slave I, TIE fighters, and a Star Destroyer show up all at once is no coincidence. Leia’s mission to find the spy and neutralize it as soon as possible becomes even more important.

Leia has always been able to show her strength in front of her troops. In A New Hope, she doesn’t mention the destruction of Alderaan to her comrades. Either Leia buries her sorrow for her home world deep down, or she admits it doesn’t matter anymore. Wood explicitly shows us the former. When she is alone, Leia reminisces about Alderaan through videos of the once-beautiful land. From last month’s warrior princess to this month’s broken heart, Wood is establishing Leia as a dynamic, central character to Star Wars.

Other characters are mentioned in this issue. Luke’s prowess as an X-Wing pilot gains him recognition amongst his peers, and the appearance of Colonel Bircher on the Devastator is a nice spin on the Imperial side of the story. Cold, calculating, and cocky, Bircher promises to be a ruthless Imperial anxious to climb the ranks.

Star Wars continues to be a great comic book for fans of the movies. Wood has a good grasp on the various characters of the universe, and D’Anda brings the actors’ likeliness to the page without overdoing it.

It’s a buy! Issue two builds nicely upon issue one without being overly wordy. The threat of the Imperial force is intensely felt as the Rebels navigate the war after their first major victory. Leia has to hold everything together as she copes with the loss of Alderaan and the people she served. All the while, the spy continues to feed the Imperial army information and threaten the Rebels’ existence.