Hello boys, girls, moms, dads, grandma and grandpa! My name is Adam, and I am here to tell you all about the exciting and wonderful world of children’s comics that are awaiting you on that new-fangled tablet media device you got this holiday season!

I should start by telling you that I am in no way an expert in child psychology. I am a school teacher and I deal with children of all ages every day. I eat lunch with them, play tag with them, teach them, and most importantly I talk with them. I would like to believe I know a little about what they like.

All of the books I will be talking about here can be found on Comixology (app available on PC/Mac, Android, Kindles, iPads, and more). A lot of the books can also be found via Amazon, bookstores, and even your local comic book shop, but a few are digital only books.

Some children might find the progression through panels on a page confusing. Comixology offers a great guided view feature that pretty much turns each panel into its own page. You can even set it to zoom out and show the full page upon entering or exiting the page.

There are a vast number of comics for children and teens. You might find there are some books on here that you never heard of. Maybe a book you were hoping see isn’t here! I have piles, rather gigabytes, of books to go through still. These are the ones that a 31 year old school teacher enjoyed, and I hope you will find some enjoyment in these comics as well. 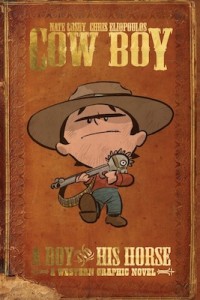 This western tale has a very Calvin & Hobbes feel to it. However, there is one exception. Calvin is a cowboy / bounty hunter, named Boyd, who is tracking down his dead-beat family.

The story is fun and hits on a variety of emotions, all while teaching several lessons. Stealing is bad. Violence is bad. There are also some deeper messages that some children may miss altogether, or just not understand. It’s these subtler, heavier themes that I would recommend this as a book you read with your kids the first time through.

Boyd’s dad was barely around growing up, so handing your kid an iPad with this comic loaded up and letting it babysit the kid might send mixed messages. Of course it depends on the maturity of the child, but if your kid turns bounty hunter and comes “lookin’ for ya,” you have been warned! 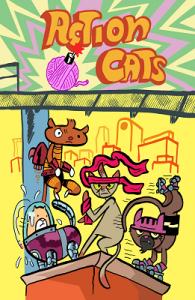 Action Cats is one of those comics that is just pure fun! You have four everyday house cats that are actually superhero-cats that fight monster, robots, roombas, and alien ninjas. Kids love ninjas, right? I love ninjas. Doesn’t everyone love ninjas? No? Well, they are evil alien ninjas anyways!

Seriously, the dialog is enjoyable and fairly easy for kids to read. Your first-graders would probably love to try and read this on their own, and older kids will love the wackiness.

Are there any big moral issues being tackled here? Not really. It is just a fun book. It is no more violent than Saturday morning cartoons or Looney Toons.

So far there has only been one issue of Action Cats. It is a fairly new comic from digital distributor Monkeybrain. Unfortunately, that means you can only get it through Comixology. On the plus side, it is only 99 cents, and you get a fun adventure with Jetpack Cat, Aqua Cat, Rollerskate Cat, and Karate Cat! 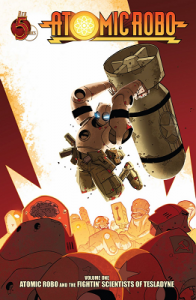 Atomic Robo is the story of, well, Atomic Robo. He is a robot that was created by Nicola Tesla back in 1923 and he is still around to this day. The stories in the various Atomic Robo books feature Robo, his team of action scientists, a trip to Mars, fighting vampires from the Vampire Dimension, exploring ancient ruins a la Indiana Jones, blowing up secret Nazi facilities, facing off with Dr. Dinosaur the time traveling velociraptor, and helping kids at the science fair.

It’s cleverly written and full of wit and charm. There are even some emotional moments as well. Robo has been around a long time and has lost many friends to both old age and wars. At the core this book has heart. It teaches kids to think things through, question how things work, and puts an emphasis on using science to solve problems. If all that fails, then we bring out the giant lasers guns.

Your younger kids might enjoy this book if you read it with them and help them through some of the more difficult “sciencey” stuff. This is definitely the kind of comic older kids and teens will enjoy.

There are several FREE issues on Comixology that you can check out to get a taste. I would avoid starting with Atomic Robo: Real Science Adventures. These are short stories written to fill in gaps or flush out the back story of supporting characters.

One last note: In 2008 & 2012 Atomic Robo was nominated for Best Limited Series at the Eisner Awards. 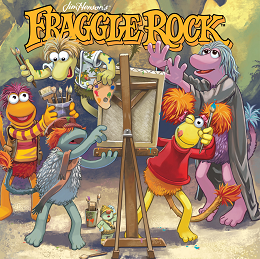 For the toddlers and kids learning to read, Fraggle Rock is something that they will enjoy. For you parents that remember the old TV series, you’ll enjoy seeing some familiar characters again.

This is a Jim Henson property which means it’s not filled with needless violence, but is filled with messages about friendship and imagination. Also, each self-contained story lasts about 10 pages. It’s perfect for shorter attention spans.

There are some “activity” pages in the comics that digital users might find useless. I would suggest taking a screen shot on your device (varies per device) and then print out that photo on some white paper. 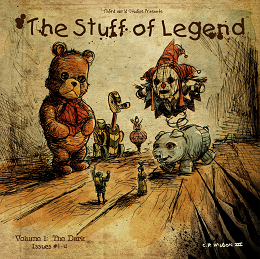 Stuff of Legends is one of two titles I’d like to recommend that offers a larger more epic story. The art is beautiful and reminds me of various books from my childhood, including The Little Engine That Could, Velveteen Rabbit, and Where the Wild Things Are. The story can be frightening for some children, as the Boogeyman kidnaps a young boy. It’s then up to a group of his toys to venture into the dark and rescue him. There is camaraderie, betrayal, sacrifice, and love in this story. 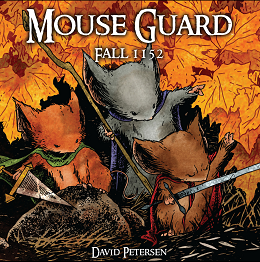 For those children that love sword fights, and for the adults that like a little conspiracy, you might want to check out Mouse Guard. The art in here is another that holds that nostalgic feel. Mouse Guard features a whole civilization of mice and the Guard that is sworn to protect them from snakes, weasels, and the wilds. Whether by coincidence or design, there are even whiffs of classic tales, such as Dumas’s Three Musketeers and Jacques’s Redwall books. 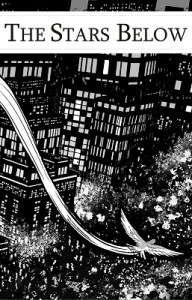 Above I mentioned Action Cats, but there are several other comics from Monkeybrain that you or your child may enjoy. There are several I would recommend for you to check out; Bandette, Aesop’s Ark, Amelia Cole are a few that come to mind. The Stars Below is another great story. It contains no dialog, so even children that cannot read yet can enjoy this story. It is a fantastic little story about a bird searching for the night sky that is lost to the light pollution of a big city.

The Monkeybrain titles are all relatively cheap, so take the time to find one you and your child can enjoy. Part of the fun of reading comics is discovering new titles on your own; not going down a checklist of things to buy!

My Little Pony: Friendship is Magic

This is a pretty fun book for everyone young and old. It’s a new series that just stared with issue #1 a few weeks ago. The ponies are all about friendship, helping each other out and learning valuable life lessons. Talking Comics own Joey Braccino reviewed this book so check it out for more info. 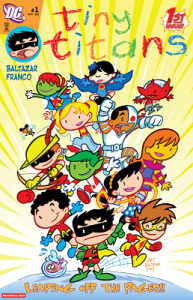 Super heroes are what come to the minds of kids and adults when they think of comic books. The comic industry is held up by super hero stories, but the honest truth is many of them are not accessible for children. Themes are either too complicated, mature, or too violent for preteens.

In most cases there are comic book adaptations for current animated series. These stories are pretty much continuity free or fall within the continuity created in the animated series. Keep a look out for Marvel Adventures Spider-Man, Batman Adventures, Superman Adventures, Green Lantern: The Animated Series, Avengers: Earth’s Mightiest Heroes, and Young Justice. If you have a problem with your child watching those shows, then I would avoid these titles as the themes found within will be the same as the shows.

For you parents that remember Tiny Toons, Tiny Titans has a very similar premise. We have stories that revolve around the younger heroes and sidekicks at school and just hanging out. It’s quirky and fun and I really can’t give you a reason to not check it out. Issue #1 is available free on Comixology, so why not take a look?

Superman Family Adventures follows in the same vein of fun that Tiny Titans offered. The exception that is follows the adventures of Superman, Supergirl, Superboy, the Superpets, and all the rest of the Metropolis gang. It’s currently an ongoing series; something to look forward to every month and teach the kids how to be patient!

Marvel recently released the Muppet Babies inspired A-Babies vs X-Babies. It was only a one shot, but it is an enjoyable read for all ages. There isn’t really any reason for anyone to not pick up this book. Steve Seigh recently reviewed it, so please give it a read if you need further convincing.

There are no absolute buys with any of these books. The most important thing is sit down with your child and talk about they want to read. If you are enthusiastic, your child will be too. Sit down and read a few pages with them. Show them how to use the app and let them turn the pages. All of these books can be fun, so make sure the experience is fun as well!