A monthly column by Talisha Harrison aka Tali Adina

Happy New Year my fellow geeks! Welcome to Talking Comics’ Character Spotlight! It’s been awhile since I wrote new articles for this column and I sincerely apologize. Life got in the way and things got hetic and busy. But I’m glad to say that I’m back and with a vengance! For those who are new to this column, Character Spotlight highlights characters from the comic book, animated, and TV Sci-fi, fantasy, adventure genres. Instead of weekly posts, I’ll be bringing you a new character spotlight each month. And we’re gonna start this column off with a bang this year with this awesome character. This month’s spotlight falls on: 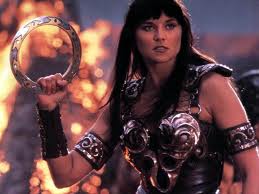 As a kid during the 90’s, this was one of the shows that I watched. I loved it because it had action, adventure, and it didn’t hurt that the lead character was a badass female who was just awesome all around. I loved this show and it’s just one of my all time faves. If I do have children, I would name one of them Xena. It’s just a cool name. So here are a few facts about Xena:

As you can see, Xena is an awesome character. If you have never seen Xena, I urge you to go on Netflix or get the dvds and watch it. It’s a ground breaking show that kicks ass. And this concludes this month’s Character Spotlight. I’ll be back next month with a new character. Until then have a wonderful new year!