I read and loved a lot of comics this year. I delved into the world of web comics, got a little more involved with DC and Marvel and supported awesome indies from Image, Dark Horse and IDW.

I didn’t really have a lot of trouble picking out my absolute favourite comics of the year, but I DID have a lot of trouble picking out the order in which to place each of these things. Therefore, my introduction to my Top 10 Comics of 2012 is letting you know that these are my favourites and they are in no particular order. As an added bonus, I throw in some of the things I’m most looking forward to in 2013, so check that out at the bottom as well. Oh, and embiggen the images on the right by click, click, clickin’ on them!

So, let’s get things started: 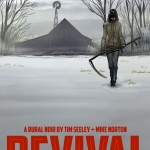 Is anyone even remotely surprised that this made the list? Probably not. Still, if you’re not reading it yet, you are doing yourself a major disservice. This is hands down one of the best comics of the year. Revival focuses on a town that’s been quarantined after people who have died start coming back to life. They don’t come back as zombies, they just come back as the person they were before they died and no one knows why. 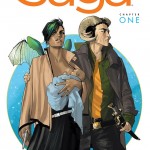 This is another comic that should be no surprise to people who’ve listened to the podcast before. This is another comic that should be on your MUST READ list. I loved reading the series issue by issue, but I’ll definitely admit that the first volume read a lot better in one sitting, so now is the perfect time to pick that up. Saga is basically Star Wars meets Romeo and Juliet… or just Romeo and Juliet in space. A man and a woman fall in love despite their respective races being enemies at war. They conceive a child and once the child is born, they begin the never-ending race to always be one step ahead of those who are hunting them. Brian K. Vaughn is enough reason to buy the series, but despite his incredible writing prowess, Fiona Staples is the biggest draw to this series with some of the most incredible art that I have ever seen. True story.

Sarah and the Seed
Written and drawn by Ryan Andrews
Published online at ryan-a.com 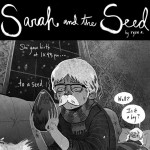 I’ve spent a lot of 2012 talking about this comic as well and for good reason. Ryan Andrews is absolutely brilliant. Sarah and the Seed will take you hardly anytime to read and you will be a better person for having checked it out. Seriously. Ok, not that it’s life altering, but it’s such a beautiful comic that you can’t help but be moved by it. The art is exceptional and done solely in grey tones. You can still see the colours that are meant to be there though… the mark of a truly great artist. The story is simple and touching; a man and his wife desperately want children but after years and years come to terms with the fact that it will never happen. Until the day she becomes pregnant and gives birth to a seed. Sound bizarre? Who cares… it’s awesome, so just go read it. 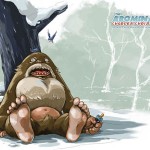 This is a wonderful web comic that’s completely readable online and is also collected in two volumes (the second volume is about to be shipped out). I don’t want to give too much away but it’s beautiful and wonderful and it has the ABOMINABLE SNOWMAN IN IT. So there.

Hark, A Vagrant
Written and drawn by Kate Beaton
Published online at harkavagrant.com
Published by Drawn and Quarterly 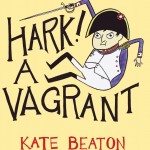 Kate Beaton is a genius with a pencil, pen, marker, crayon… whatever. She draws Wonder Woman, Nancy Drew, Wolverine, Napoleon and a zillion other characters. Oh, and she’s hilarious. It’s not just a funny comic though, there are FACTS to be learned! Facts, I say! And you can tell that Beaton is passionate and knows what she’s talking about. 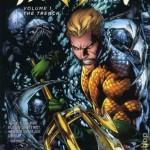 I absolutely adored this take on Aquaman. I’ve truthfully never read anything Aquaman before, aside from his appearances in other things that I’ve read, but I still knew little to nothing about the character and previous story arcs. I was able to jump on board with the series and fully embrace it for everything that it was. The art is great, the story is fantastic and it’s definitely worth checking out, if you haven’t already. 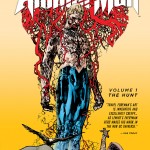 Jeff Lemire managed to put together the most perfect comic for the DC New 52 with Animal Man. The character was absolutely someone I never would’ve read before the series reboot and not because I had anything against Buddy Baker, but mostly because I didn’t know he existed and wouldn’t have had a clue where to start. Lemire made the series perfect to jump onto and the art perfectly suited Lemire’s writing style. Lemire also managed to write in several fantastic supporting characters such as Buddy Baker’s wife, son and daughter. If you could only choose one DC New 52 title to read, I would pick this one. 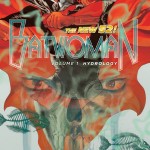 Batwoman is phenomenal. Absolutely phenomenal. This is worth picking up for JH Williams III’s art in it initially. It eventually changes over to Amy Reeder, who is still good, but yeah. JH Williams III then jumps into the writer’s seat and does a pretty bang up job of making it swell. My only nitpick with it is that despite being incredible, it doesn’t entirely stick with the philosophy of the whole reboot for the DC New 52. It spends a lot of time referring back to Batwoman: Elegy, so in that sense, it wasn’t a proper reboot for me. To be fair, the only real book that you need to be familiar with to REALLY enjoy the series though is Batwoman: Elegy, so there’s that. Nitpick’s aside: go read Batwoman. Kate Kane is a hot, ass-kicking lesbian who don’t take no sh*t from nobody. 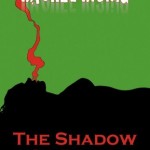 Rachel Rising is another book that will likely not come as a shock to anyone. I love this book and as I said on the podcast, it’s the best comic that you’re not currently reading… and I MEAN IT. Rachel Rising follows the story of Rachel, a girl who wakes up in the woods. She’s clearly been killed and she has no idea how or why. All she knows is that someone buried her and thought she was dead. So Rachel sets out to get answers. And it’s awesome… So, SO awesome. Terry Moore is a comic book guru to be revered by all. 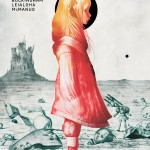 I’ve spent a lot of the year deliberately not talking about Fables too openly. I’ve made a note about why at the end of this list, so please read that. I want to take THIS time to focus on why this is on my list. I’ve been a longtime fan of the series Fables and I’ve seen it take some dark and twisted turns. Not so dark as this story arc that focuses on Therese, one of Snow and Bigby’s cubs and gives us a little glimpse into the prophecy that was mentioned:

The first child will be a king.
The second child a pauper.
The third will do an evil thing.
The fourth will die to stop her.
The fifth will be a hero bold.
The sixth will judge the rest.
The seventh lives to ages old, and is by heaven blessed

Bill Willingham writes an emotional tale of a seemingly innocent place and what sacrifices one must make to escape a place that is full of nothing but nightmares.

READ IT! You might want to brush up on your Fables if you aren’t caught up since this this volume collects Issues #114-121.

Things to look out for:

*Fables has even one of my all-time favourite series’ in comics since I started really collecting. My friend, Mel, kindly lent me the first volume (Legends in Exile) quite a while back, confident that I would enjoy it. I did. I really, really did.

You might know that I now work as Bill Willingham’s personal assistant and sometimes when I recommend Fables, people seem to think that I’m recommending it because I’m biased. I read Bill’s stories long before I ever knew him or had even met him or spoken to him.

I want to set the record straight. My opinions are not for sale. Bill is my friend and my boss but he’s also a great inspiration to me and I owe him much more than lying to people about his work to get people to read it. That’s not my job and I would quit if I was ever asked to compromise my opinion to promote something that I didn’t genuinely enjoy.

If you don’t want to read Fables, then don’t read it, but I’ll tell you right now that you’ll be missing out on one of the best comics created in this generation.