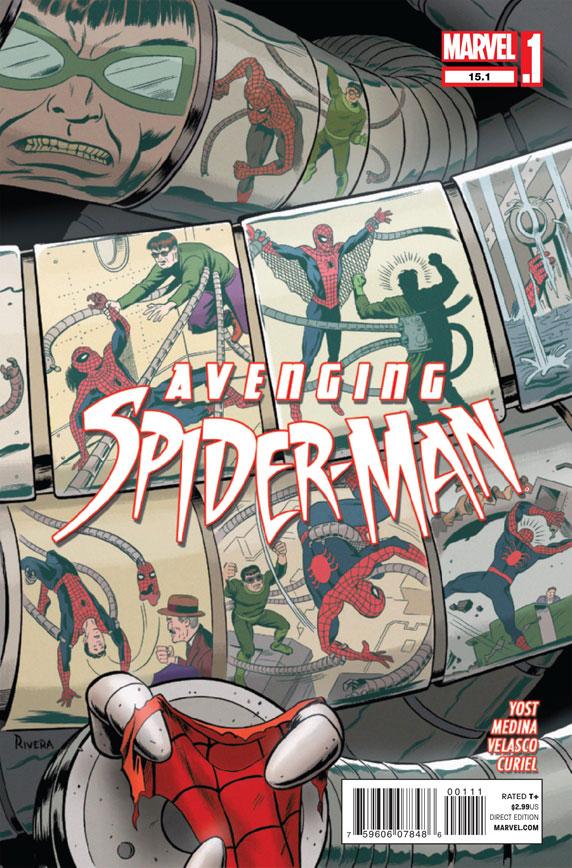 After the events of Amazing Spider-Man #700, Peter Parker (or at least the Peter we all know and love) is dead and Doc Ock is in in Peter’s body. Avenging Spider-Man #15.1 shows what the next few days are like for the former villain turned hero.

When the story begins, we see Octavius adjusting to his new life as Peter Parker. While he may still be a villain at his core, after what had just transpired a few days ago, he sees Peter’s life in a whole new light and dedicates himself to become a better, more superior Spider-Man. What that means is spending more time experimenting and upgrading his suit, finding ways to better his work at Horizon Labs and trying to find time for his newly restarted relationship with Mary Jane. All the while, Octavius reflects on his former life and how much wrong he was really doing.

Chris Yost, who’s definitely no stranger to Spider-characters, handles the writing this issue and he does an incredible job. Making a character like Octavius seem sympathetic while never compromising his character would seem hard for most writers. Luckily, Yost knows how to do it, all while injecting his signature humor and flair. At times, mostly due to the way the issue is set up, things can seem rushed or overly wordy, but Yost continues to show why he is such a consistently good Spider-writer.

Paco’s art is brilliant from start to finish. Featuring rich, vibrant colors with great attention to detail, every panel seems to jump out at the reader. Even though the issue mostly works as a coda to ASM #700, Paco utilizes each page to make even the most mundane task seem interesting to look at. The action, brief as it may be, is really well executed and you can tell that Octavius fights a lot different than Peter. Paco shows Octavius as a more strategic but still green Spider-Man and it’s nice to see that he made the effort to show the differences. Quality work through and through.

If you read Amazing Spider-Man #700, Avenging Spider-Man #15.1 acts as a great follow up to the issue as well as giving audiences an idea of what to expect from the upcoming series. Chris Yost puts us into the mind of Octavius and really does a good job of showing his transition from super-villain to superhero. Paco Medina’s art is colorful, vibrant and beautiful and really adds a lot to the book. So I say give this issue a read, it’s worth the three dollar price tag.