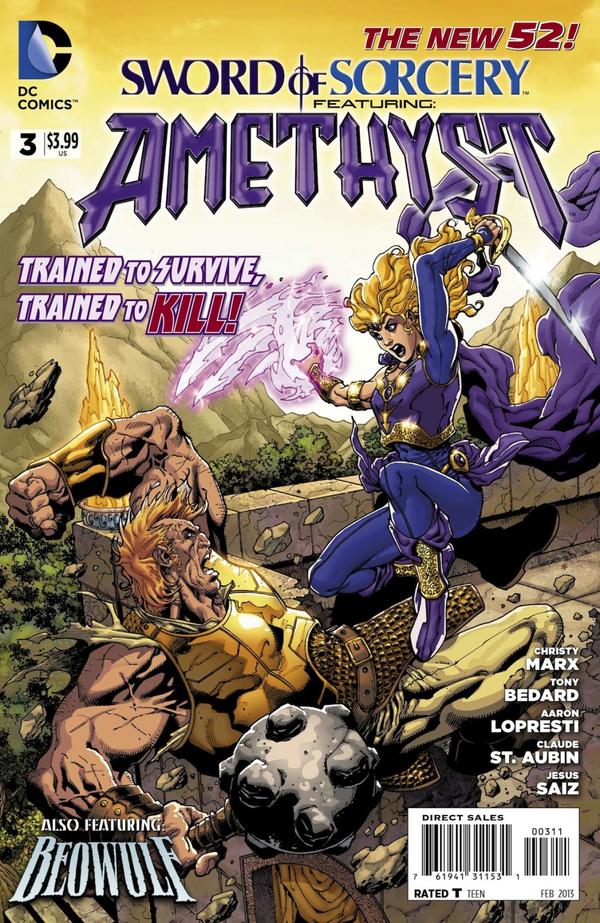 Oh Sword of Sorcery, how do I classify you?  A brightly colored, playfully characterized, fish-out-of-water fantasy romp?  Or the brooding ‘Game of Thrones‘-esque saga of warring houses and factions with the political intrigue that follows along with it?  Perhaps the grim post-apocalyptic re-imagining of the first superhero in our world’s literary history?  While all of these things are present, not one facet overpowers the other, which makes things difficult for me to place this title into a neat little labelled container.  As a quasi-anthology title though, it’s how the ingredients that comprise this mishmash of disparate themes comes together that ultimately decides the quality of the book; and Sword of Sorcery #3 is serving up a fantasy-flavored soufflé.

Taking the role of the eggs in our pastry-based analogy is the lead story of Amaya (otherwise known as Princess Amethyst) and her unexpected travels through Gemworld.  Finally settling into a slower moment for our young heroine, this fourth installment continues to expand the focus of detail on Gemworld, the precious-stone based houses that make up the tapestry of its royalty, and the introduction of support characters both allied and against the young princess.  Her training in history and her newly-gained powers is interrupted when an agreement is made between her mother Queen Graciel and her aunt, the Lady Mordiel, who has wrested power over the Amethyst line in their absence.  Calling for a meeting between all of the women of House Amethyst in an attempt to resolve the inter-faction warfare that plagues their line, Queen Graciel lays out a proposition that leaves her rival truly (truly) outraged; leading to a declaration of war.  As the Queen seeks allies in the coming war, Amaya is left in charge of her family’s belongings, with one item possibly leading her to a new ally in the final panels; an ally that folks following the new Princess Amethyst will not be too surprised to see.

The cheese of our soufflé is covered by the backup of Sword of Sorcery #3, the neo-fantasy interpretation of Beowulf.  Why the cheese, you ask?  Because it’s cultured.  *Rimshot*  Following the original Old English ballad of the proto-Norse superhero (whose original verses still haunt my brain from forced school memorization decades later), I’m actually rather impressed by how closely it mirrors its predecessor in plot beats.  Confronted by the bestial Grendel’s malevolent ‘mother’, the links between this medieval-future time period and the modern-day DCU are strengthened as she regales Beowulf and Wiglaf with the history of who the cybernetic warrior is, as well as the reasons why the world came to ruin.

Both stories offer a healthy amount of world-building to wrap up the final chapters in their introductory arcs.  Beowulf, and the setting he now inhabits, have been neatly established; building a solid foundation for delving deeper into his pre-existing mythology and adventures (Beowulf pro-tip: Beware of dragons) as well as the far-flung future of the DC Universe.  Building on the patron relationship between Beowulf and Wiglaf, there is an avenue of character development and growth that is started on in this issue; offering those looking for more than a medieval brawl an interesting angle to see these characters through.  The headline story of Amethyst looks to be finding its footing on the direction it is going to pursue, and has done an exemplary job of adding all of the characters, factions, and details of Gemworld that it has in such a short time to create a living setting.  Slightly surprising then, that it looks as though the next arc is going to completely head off into a new direction for the character and her surroundings; but I will wait to see what that entails before passing judgement.

Lopresti and St. Aubin, sharing art duties on Amethyst, perform a practically seamless transition of duties in the story.  While matching each other in the skill of expressive faces, bustling backgrounds, and fluid motion during action scenes, I would have to give the edge to Lopresti for his intricate detailing of minor costume and set pieces that made his pages stand out.  I would be remiss to not mention Hi-Fi’s colors, with its vibrant shades giving a feeling of life to the static panels, and drawing the eye to points of interest within scenes of battle.  Counter to Amethyst, Saiz performs a serviceable job with his comparatively loose style in Beowulf.  Less detailed than the headlining tale and heavily shaded in browns, it excels when displaying acts of combat, but the slower scenes suffer slightly when trying to convey much in the manner of emotion.

If you have a taste for fantasy, Sword of Sorcery should certainly be a buy on your list.  While #3 is not the strongest of either story, both do an excellent job of preparing their respective settings for possible avenues to follow now that their concepts are established.  I’m personally hopeful that future arcs of Amethyst continue to dig into the various House politics, maneuverings, alliances and betrayals; as the groundwork has been laid and it would offer a unique aspect to the DC Universe.  Beowulf has 90% of his epic before him still, ripe for interpretation in this apocalyptic future (and possibly providing a vehicle for Kamandi to ride shotgun afterwards in the setting?).  Finally, rounding out our soufflé comparison, both took big risks in slowing down to world-build this early into their runs, so it will be interesting to see if the following issue allows them both to either rise to excellence, or collapse like a bad sitcom plot gag.

Jump-On Point:  This issue would work, but Sword of Sorcery #0 is the start of this arc.