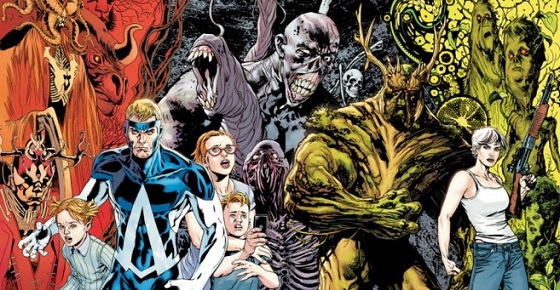 The dark and twisted books that could keep chugging along through the disgusting dystopia that is Rotworld, and it continues to surpass my expectations of what a crossover should deliver. I would even venture to say that this crossover, so long as things continue with such quality, may just end up better than Snyder’s Night of the Owls event. I’ll get to why that is a legitimate possibility later, though.

Both books’ stories still mirror each other to a degree. Buddy and Alec are fight to protect their respective oasis of life and venture out after realizing that there may still be a reason left to fight for. The actions in both books are a spectacle. Steve Pugh and Yanick Paquette are meant for things like this. The artists are able to bring the heavy hitting brawls that complement the ridiculous odds that face our heroes, and with that they are able to incorporate the grotesque, almost zombie like grossness that the Rot possesses.

Paquette has kept up the same kind of innovation that made the first arc of Swamp Thing so special. He may have only been on roughly half the books that have been released, but when he is he’s put out some of the best work I have seen. I’ve said it before, but he is the one artist that should be on Swamp Thing.

Mr. Pugh, on the other hand, does things with a deft hand. His layouts may not be anything that we haven’t seen before and his lines are the kind that jump off the page at you, but that doesn’t mean that his work isn’t top notch as well. He keeps a similar aesthetic as Travel Foreman used, but is able to bring the Rot into the panels as well. In times where Buddy and company are in over their heads, you see what look like black clouds encroach on the pages. It’s a fantastic addition, similar to how Paquette’s panels shift depending on the situation.

This works so well because it is such a tight knit story between two books, but will soon become three as Frankenstein will join the party. Unlike the aforementioned Night of the Owls, it is not spread across an entire lineup of books. Rotworld lies in the hands of a few creators that are close friends and are deeply passionate about their books. Not saying that the Bat-writers aren’t deeply passionate, but because there are so many different Bat-books it’s harder to keep it a cohesive story. Night of the Owls turned out better than expected, but it felt a little repetitive at times. While these stories are mirroring each other, they differ enough in writing and art style to feel like different stories. 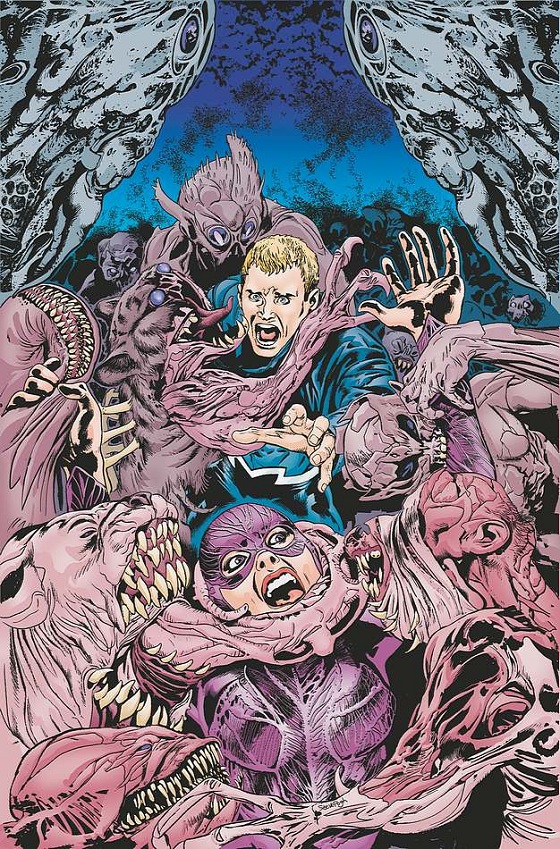 Animal Man is still a story about Buddy trying to save his family, and it is still incredibly compelling. Little Wing is in dire straits in the present timeline, and there is nothing anyone can do about it. She’s alone with a totem that can only give her advice. Well, I’m sure it could hiss and scratch, but that’s really about it–as far as I know. Not only do we get to see the perils that Buddy is faced with, but we’re given a front row seat to a child, on her own, trying against all hope to escape sure death. It’s chilling.

To make sure things don’t get too doom and gloom, though, Lemire includes one of the greatest characters ever in Shepherd. He’s a great relief from the tension that Jeff so expertly builds. He and Scott are completely different writers in style, but are able to do the same thing so damn well, that It is a little frightening. From this day forth, Buddy Baker shall never be addressed by anything other than Butter Baker Blondie Man. Best. Character. Ever. 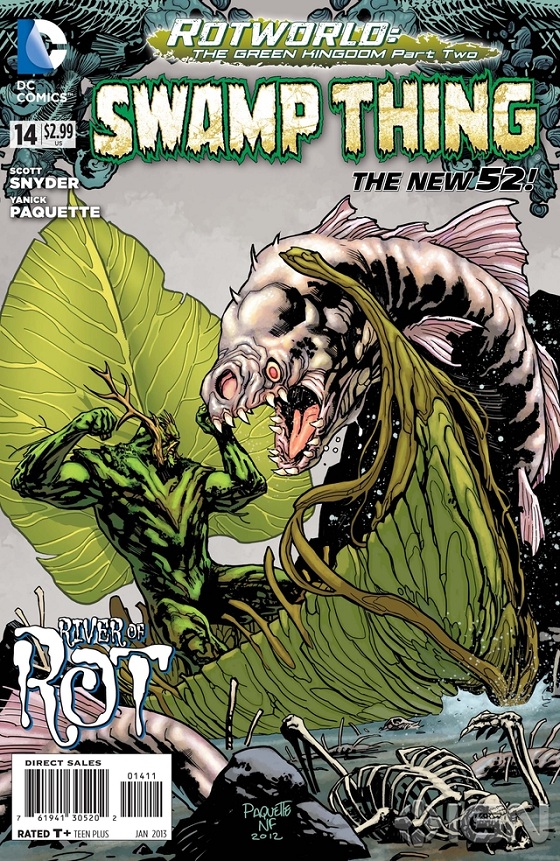 Both books are technically love stories. Whereas Animal Man is about the Baker family, Snyder’s Swamp Thing clearly has Alec and Abby at its heart. That’s even more apparent after the annual was released.

Alec is dead set on not believing that Abby has passed away. His journey, despite what heroic acts we are to expect from heroes, is a selfish one. He has one thing on his mind, and it is his one true love. Any fallout that may happen with Anton along the way is gravy, but so long as he is able to save Abby, Alec will feel accomplished in his goals.

Snyder has always had a good voice for Alec, but the way he handles the Parliament is fantastic as well. They aren’t completely withdrawn like the Guardians, per se, but they are very much about the task at hand and what it will take to get it done. Casualties affect them, but it isn’t something that will cause them to pause for more than a passing second. The way he handles it kind of makes me want to see him on a Lantern book.

I can’t say that one book is better than the other this week. Both are far better than most other books you could read this week, and still setting the bar for most of DC’s other books in general. Paquette’s art is stunning, and Lemire’s story is both hilarious and heart wrenching at times. So, you’ll just have to buy them both.