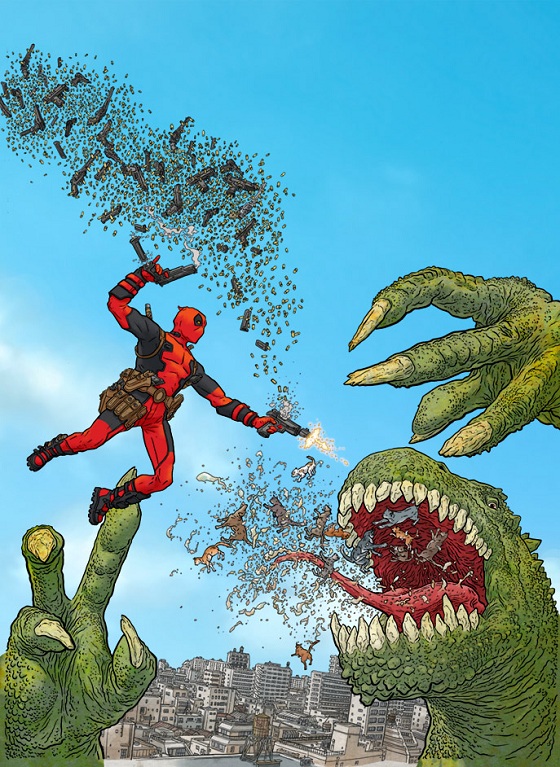 There have only been a few occasions that Deadpool has ever appealed to me. Remender’s X-Force is the best, and most recent, example of Wade being handled well and the only one that comes to mind, but Gerry Duggan and Brian Posehn along with Tony Moore have got me. They can do whatever they want, and I will follow them in this series.

First things first, there is a ton of humor in this book. Yes, it is in your face. Yes, it is constant one liners. But this is the funniest Deadpool booksI have read in a long, long time. There are references abound from an obligatory Dark Knight line, to Wade’s take on a classic Tombestone line. It was the Tombstone line is what sold me—just so you know.

More ridiculous than the things that come out of Wade’s mouth is the story that is laid out. America’s deceased presidents are rising from their grave, and plot to destroy the country that they helped shape. While it is awesome to see the Merc with a Mouth fight FDR, and get shot from behind by Abraham Lincoln (which was also hilarious), there is some seriousness to this book. The underlying message of the book is powerful. The zombie presidents are completely displeased with what this country has become, and want to destroy the abomination that we have become to rebuild it from scratch again. It’s not in your face, but it is definitely there and it really adds a nice ground to the series.

Tony Moore did a fantastic job bringing this book to life. He’s absolutely perfect for the style of book that Duggan and Posehn are creating. It’s a very cartoony look, but fits the outrageousness that Deadpool inherently possesses. He does an exceptional job with the effects of the zombie’s powers, and is able to carry out fluent, coherent action as well.

This was the book that I got more and more excited about as more information got released. I can’t say that I could have been happier with the way it turned out. I am shocked that Deadpool appeals to me, though. But this book works, and it’s exactly what I need in my monthly routine. Its humor and lighthearted nature is a great break from the doom and gloom that most comics bring to the table lately. Please, pick this up. Support the new guys; they have done a really great job in their first voyage into licensed characters.