FacebookTwitterPinterest
So you're going to New York Comic-Con, huh? Awesome! This year's show promises to be amazing, lots of guests and events to help wrap up this year's big conventions.

So you’re going to New York Comic-Con, huh? Awesome! This year’s show promises to be amazing, lots of guests and events to help wrap up this year’s big conventions. 2012 has been a huge year for comics, and lots of big news has been slung around at all fronts. Honestly, this has been the best year to get into the game and start looking at the industry as a whole.

If this isn’t your first rodeo, but your first time at NYCC, you might expect something close to San Diego Comic-Con which is a pretty accurate guestimation; especially considering they sold approximately 190% of last year’s admission.

Ticket sales are already way ahead of last year’s pace, says show runner Lance Fensterman, global group v-p at ReedPOP, which produces pop culture festivals around the world. “Sales are pacing about 190% ahead of last year,” he told PW. “All four-day and three-day passes are already sold, and so is about 70% of our retail inventory.” He expects all the tickets to be sold out before the show—walkup sales will not be possible. “I already know what attendance is going to be, given the space, about 100,000 to 110,000.”

As I am writing this all but the Friday tickets have now been sold out, this even includes the retailer locations scattered about NY. Last year when I attended it was pretty close to SDCC but there was still room to breathe and far from being as chaotic. Heck I could still find electrical sockets to charge my phone. This year promises to be a different animal so it pays to run the numbers and get prepared.

If this is your very first convention, I am so happy for you to get a sampling of the raw awesome these conventions can be and I hope you have a wonderful experience. That being said, buckle up, it’s going to be a long drop. Obvious things like comfortable shoes, and making sure you have your ticket are pretty standard things but you’d be surprised how often even veterans mess up on them or wait till the last minute and just forget. If you’re flying into NYC, you’re laundry list of things to do just tripled. Factoring in things like finding a route from your hotel to the con, and back, reliably is a big one; especially finding the more affordable routes. If you blow your convention money on taxis it might put commissions and other swag off your menu. “How do I get from A to B in the best time, for the best price?” 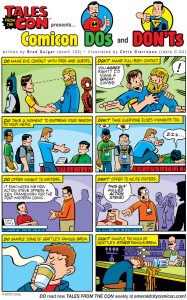 Still wondering how to best prepare for this sort of adventure? Don’t worry! This level of convention is well researched, a la SDCC. When conventions become this level of big, a lot of the same variables begin to line up so while there might not be as much NYCC data available right now, there is a truck ton available on SDCC. Though I firmly believe that after this year people will start to look at NYCC in much the same way they look at SDCC. When Nerds Attack runs a lot of information about SDCC and preparing for conventions, that sort of knowledge is absolute gold.  There’s also this lovely strip from the fine folks at Emerald City Comic-Con.

Stay tuned as I follow up this post with The Road to NYCC! Also if you have any questions about conventions or stff you want to know about specifcally about this show, sound off in the comments and I’ll give write up a post!