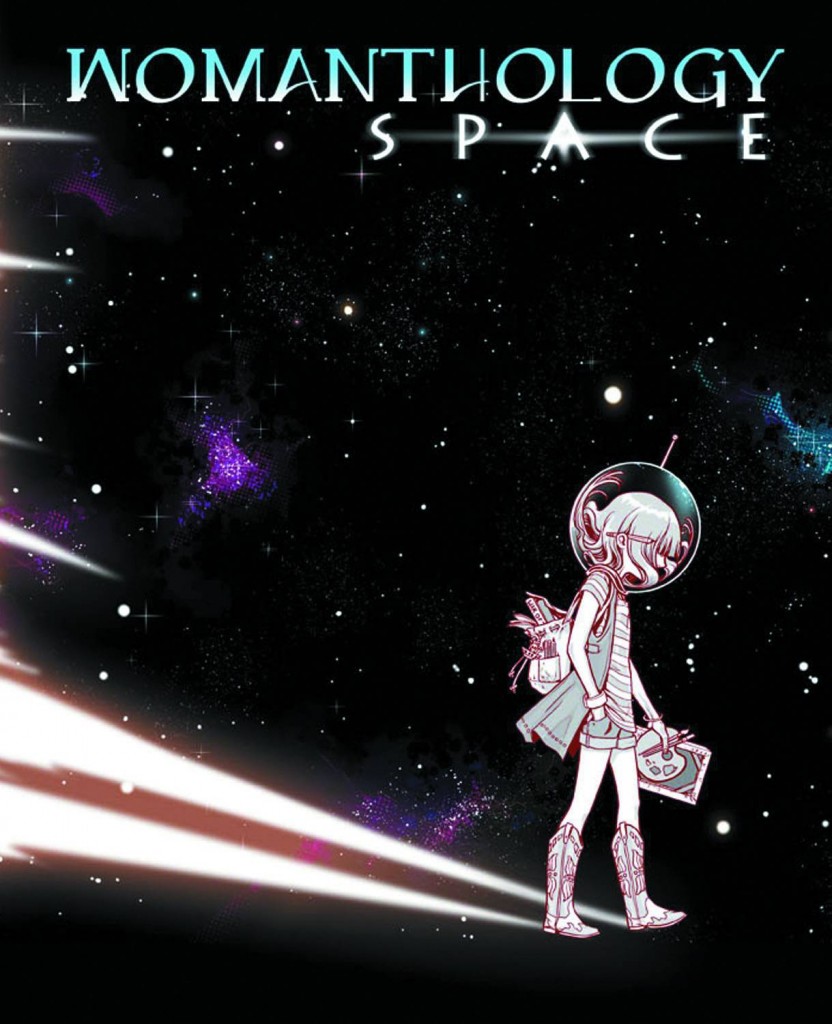 For those of you who are not familiar with the skeleton that makes the fortified bones of Womanthology: Space #1, it’s essentially a collection of comic shorts brought to you entirely from varying women in the industry. In fact, several months back the first Womanthology was released after a highly successful Kickstarter event proved that women and comics are a force to be reckoned with. Pulling talent form all over the globe as well as some existing mainstream talent, Womanthology: Space #1 is the second installment in what I hope to be a long running series of releases. We here at Talking Comics salute the efforts of each and every lady involved with Womanthology and wish them the best in all of their future releases.

What you’ll find below are short reviews for each story contained within this issue. It’s important to remember that each contributor only has a few pages to display their talents, therefore, the opportunity for lengthy reviews of each rarely presents itself. However, there is absolutely nothing wrong with creating a mood, giving readers a glimpse, and then leaving them wanting more. That, is exactly what Womanthology does best.

I like when a comic immediately reminds of something that I’m already fond of. In the case of Waiting for Mr. Roboto it’s that semi-final scene in Spaceballs. You know the one I’m talking about. “Check please!” Yeah, that one. Trixie is a diner bot who has grown board of serving the same old schleps of the galaxy day in and day out. All she wants is a little adventure, a little romance. Lucky for her someone tall, dark, and dangerous just walked through the door.

Waiting for Mr. Roboto, in my humble estimation is very cute. And though the art is perhaps a bit on the empty side I think it’s important to remember that that’s kind of the point of where our characters are in this short story. Anyone, robot or human, would go insane from boredom in a place like this. In my opinion it accentuates Trixie’s craving for a little excitement to be introduced into her life and with that in mind I find the art to be entirely appropriate. The dialogue is snappy and there’s even a few good robo-zingers peppered throughout to give you a chuckle or two in the few pages allotted for this tale. All in all it’s short and sweet.

Space can sometimes be a real bitch. What if when you were in charge of destroying a meandering space station you accidentally blew it up with someone still trapped inside?  I would imagine that the guilt would eat you alive. What’s more is that those trips back toward Earth (or whenever you’re from in the vast ocean that is our solar system) can take a very long time and you’ve got all what seems like forever to dwell on your mistake. Sometimes having only four pages to tell your story simply isn’t enough. What I would have liked to have seen from Dead Again was perhaps some more weighty dialogue to help me feel something for the characters in the story. I certainly understand the emotion that was being conveyed within these four pages, I just really wish that I’d felt the effects of the events just a bit more. In regard to the art of this story, I felt that it was okay. The human characters were drawn well enough that I felt their pained expressions and the vastness of space was most certainly conveyed. Again, if there were more pages perhaps Tanja Wooten would have had more of an opprotunity to stretch her talent but perhaps we’ll see more from her in the future.

I have two words for “Scaling Heaven” … more, please! I found this short story to be both powerful and inspiring. It’s just a few pages about the first woman to set foot on the moon but I really enjoyed it. The dialogue was strong without being overbearing, the mood of it was serious yet whimsical, and the art was gorgeous. The bottom line is that I would definitely pick up an entire comic of something brought to us by this team of creators. Perhaps it’s odd to say so but I think that I felt a little bit of Kelly Sue Deconnick’s Captain Marvel in this story. I think it was the commanding dialogue that did it. Though, to its credit, the art was also like that of Dexter Soy’s if you had decided to switch his coffee to decaff, and I mean that in the nicest possible way. Scaling Heaven  is most certainly a stand out section of Womanthology: Space #1 and I urge you all to read it.

The Adventures of Princess Plutonia

Words and art by Ming Doyle

For such a short story with so much detail about the planet it takes place on I wish that we’d had more than two pages to get acquainted with Princess Plutonia. I really enjoyed the aesthetic of Ming Doyle’s art. It’s got a very traditional/old school feel to it and looks as if you might have found it in a newspaper from several decades ago. What the story lacks in length more than makes up for it in Princess Plutonia’s conviction toward saving the earthman of her dreams from the clutches of the evil Mallika, an interplanetary overlord who apparently wears her own subjects as clothing (also awesome). The bottom of the final page states “Until next time …” so hopefully we’ll get to see more of Princess Plutonia in the Womanthology: Space issues to follow.

Okay, so I’m already a pretty big Stacie Ponder fan. I thoroughly enjoyed her contribution to the first Womanthology collection and have been following her ongoing comic RPG found at (www.rpgcomic.com) for quite some time. With that in mind I tell you that if you have any sense of humor at all you’re going to laugh at the dialogue and actions of her stick figure-like characters in Space Girls. Space Girls proves that you don’t need to be a prodigy to write hilarious and inspiring comics. Seriously, Stacie’s work makes me want to go grab the nearest piece of Xerox paper around and get to scribbling. For real folks, it’s lines like “HOLY CRAPPING CRAP!” and an emphasis on kitty cats that makes me smile when reading this portion of this Womanthology: Space #1 comic. Her work is simplicity and humor at its finest hour. With their ship heading toward disaster I’m totally dying to find out what happens to the Space Girls in the next issue of this series.

VERDICT: Yes, you should totally pick up Womanthology: Space #1. Not only are you picking up an entertaining comic but you’re giving your money toward a comic that stands for something important. Women are an integral part of the comics industry and it’s books like these that give some of the loveliest of them their chance to shine (if only for a brief amount of time). I urge you all to seek this series out and enjoy this interplanetary ride.

* This review was written while listening to the album Theater is Evil by Amanda Palmer and the Grand Theft Orchestra.