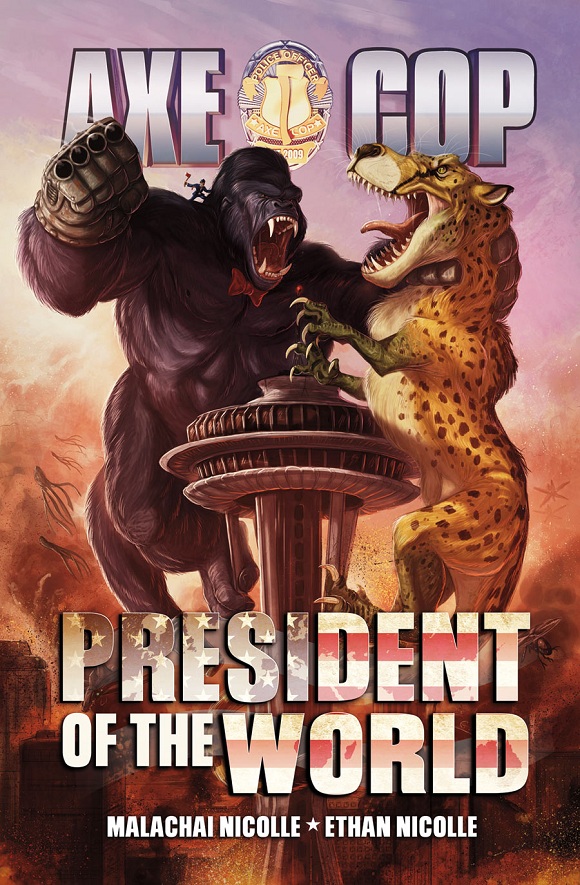 Axe Cop: President of the World #2

It’s fairly easy to figure out what is on a kid’s mind. They are really shy about coming out with their inner thoughts, and more so they don’t even need to be asked. Malachai is obviously in the developmental stage that being a part of a group is greatly important to his growing psyche. Most of his characters are trying to find a place in which they belong. The same could probably be said about him in his everyday life. Every kid goes through it…This one just has a way to express it to the world.

Yet again, the best part of this book is the imagination that comes with every turn of the page. We get to see an army of bad guys led by a chee-rex on a motorcycle. That is why the book is awesome. You never see things like this in modern day comics. Everything is dark, twisted, and gritty. But this is nothing but pure fun. Everything from the dialogue, to the narration is hilarious. It’s simple, but not in a bad way. It really adds to the charm.

As if drawing, coloring, inking, and lettering a book wasn’t tough enough, Ethan Nicolle has to match his brother’s creativity. Just imagine reading a script that asks for you to make a chee-rex. How would you even start? All the art in this book marries so well to the story, that it makes such a cohesive finished product. I’m sure that there could be other people to match the art style Ethan gives the book, but I’m also quite sure no one else would take the time to understand the intricacies of his brother’s work.

Buy it. Axe Cop: President of the World #2 is so fantastically amazing that you’re doing yourself a disservice if you don’t check it out. Go out and get it, and thank me later!