Goddess. Queen of Wakanda. A leader of the X-men. Ororo Monroe also known as Storm. 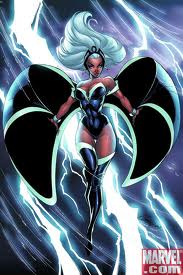 She is one of the most popular comic book characters and is one of my favorite women in comics. I know she has had a couple of mini series over the years, but Marvel should definitely think about giving Storm her own ongoing title.

The old X-men arcade game from the 90’s introduced me to comics and Storm was one of the X-men characters that caught my eye. She quickly became not only one of my favorite X-men but also one of my favorite characters in comics period. A lot of people were introduced to her via the 90’s animated cartoon series that aired on Fox Kids and also X-men Evolution in the early 2000’s as well the most recent cartoon Wolverine and the X-men. So without further ado, let me tell you a little more about this amazing character.

Storm will always be one of the most important female comic book characters and she continues to make a lasting impact. Marvel, give her her own ongoing series, NOW!