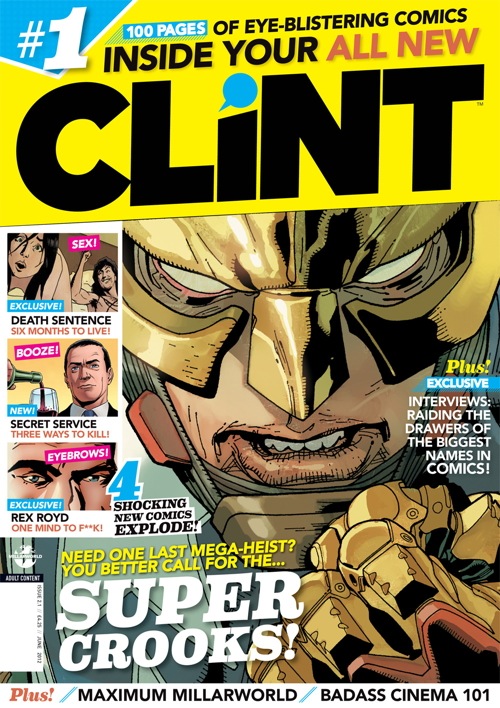 Well, it looks as if all you comic hounds that love to have a leg up on what’s coming out in the world of comic books and comic related topics are going to have another great magazine besides Previews to add to your monthly stack.

Editor Mark Millar and Designer Russ Seal, along with an entourage of talented individuals, have crafted a NEW monthly comic-related magazine that’s going to put you right in on the ground floor of what are sure to be some of the hottest upcoming topics and properties in the industry. The magazine is called Clint and I can already tell by our preview of the first issue that it’s going to do well.

Perhaps the most important aspect of a magazine (besides it’s content, obviously) is it’s presentation and layout. There’s nothing I hate more than flipping through a magazine that clearly doesn’t have its affairs in order in regard to how it approaches the reader, both from a cosmetic stand point as well as whether or not the content is arranged in such a way that it’s fun to read. Clint manages to boast its big and beautiful headings without assaulting its reader. The structure of the book is such that it invites you to read things you may very well not even have an initial interest in, which is no easy feat considering the shear amount of content found within.

This first issue of Clint has got it all: Interviews, Movie-related news, Personalized Columns, and some of the best Comic Book Previews one could ask for. Each section is clearly marked with bright, bold lettering and is often presented in a very professional manner while still retaining a tongue-in-cheek attitude and an overall laid back vibe.

Thanks to reading Clint I was informed and given a healthy sampling of books that are already making their way off the shelves, such as Supercrooks and The Secret Service. In addition, I also managed to reconnect with an old friend by way of Roman Dirge‘s 20th celebration of Lenore the Cute Little Dead Girl. It made me laugh so much to the point of compelling me to log into Amazon account.

Though perhaps the highlight of the magazine was the lengthy preview of an upcoming title by the name of Death Sentence by Montynero. This comic is packed to the gills with sex, mysterious circumstances, and lots of bad attitude, a perfect recipe for a mature comic read. It’s not to be missed.

Buy it – Just go ahead and order yourself a superscription. Judging from the content of this premiere issue, Clint is going to be well worth your time and money.

———————————————
About CLiNT
CLiNT is the comics magazine from Kick-Ass creator Mark Millar and
leading entertainment publisher Titan Magazines, showcasing brand new
comics and the cream of the creator-owned crop alongside news
exclusives from the world of comics and film, and features and
interviews with the hottest artists, writers and actors.

For more information and to subscribe to CLiNT, visit:
http://clintmag.com
Special Offer: Subscribe to CLiNT and Save 20%, plus get a FREE signed
Dave Gibbons ‘The Secret Service’ Art Card! Act now, only 200
available! To find out more visit –
http://titanmagazines.com/t/clint/local-subscribe/