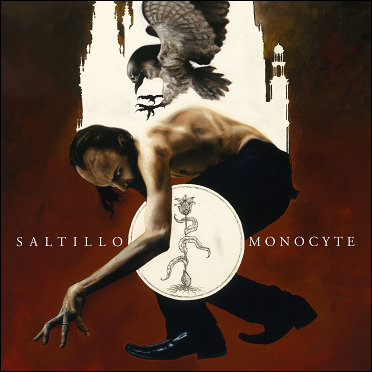 The sky has grown orange in the aftermath of the war between man and science. The two have reached a spiritual stalemate with one another and all that remains is a divide that is choking what remains of our future with crippled, bony hands. Ruined cities are hidden inside of thick mists brought on by the poisoned water that hisses like acid as it pools before our weary feet. The cries of the subservient echo from the mouths of tunnels that lead to nothing but more uncertainty and hollowing in these dark and shattered times.

A shadow falls over the land, bringing with it a cruel melody of winds, percussion, and strings. Piercing through this soothing madness is the voice of Sarah Matthews, telling you that all will be well. Though, however she might be cradling our senses one thing remains true … that if man is not willing to confront himself as he gazes into that proverbial, cracked mirror … all is already lost.

These are just some of the thoughts I have floating around in my head as I listen to the music from the newly released Saltillo album: Lapis Coil that coincides with the themes and world of the dark and overly cerebral comic, Monocyte. Now released on vinyl this intense and groove-tastic album has been reworked and remixed for your listening pleasure. Of particular interest is the stunning new track included on this version of the album, Necromancy.

Ripping into your bones with carefully structured break-beats complete with an almost gospel chanting, this track makes you want to get up and dance. Serving as a sort of B-Side this track is very much the polar opposite of anything else you’ll hear while listening to the album in it’s entirety. But I say this now, in no way shape or form does this departure in sound detract from the vast soundscapes that occupy the other tracks. No. What it does is create a juxtaposition between sound and emotion that to the trained ear will be a reason to rejoice. Variety is both the spice of life and music as well, make no mistake about that.

I urge anyone who reads this review to seek the album out. Here, I’ll help you: http://www.stormingthebase.com/saltillo-monocyte-the-lapis-coil-vinyl/ Yeah, that’s right. Now you have no excuse. Seriously, if there is anything I love more than comics it’s music. I’ve been singing since I was 5 years of age, have dabbled in a few instruments (none of which I am very adept at playing, sadly), and I travel into the city several times a week just for the feeling of innumerable decibels probably doing major damage to my left ear. Ha ha. I use music as therapy, an escape. It’s one of the most important forms of expression man has ever birthed and I would never exaggerate or lie to you about what I think is good or what’s crap. Check this album out. You won’t regret it.