FacebookTwitterPinterest
So here we are, mere days before Marvel’s The Avengers unleashes itself on audiences across the country. It’s a film we have been promised since 2008’s Iron Man dominated domestic and worldwide box office, and 2012 seemed oh-so-far away. But it is here now. 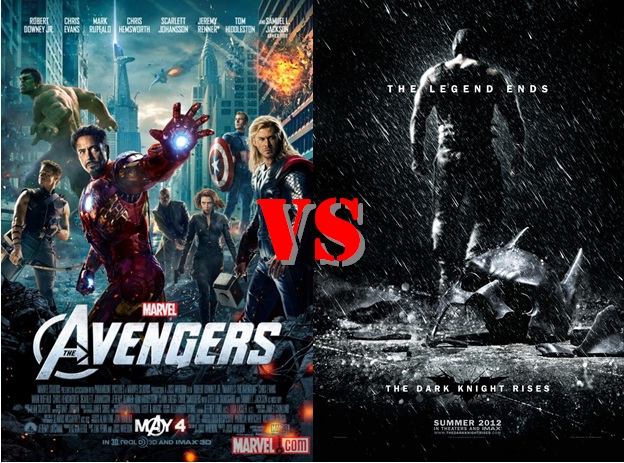 So here we are, mere days before Marvel’s The Avengers unleashes itself on audiences across the country. It’s a film we have been promised since 2008’s Iron Man dominated domestic and worldwide box office, and 2012 seemed oh-so-far away. But it is here now.

We also have been anticipating what may be the most anticipated (by internet standards, perhaps) film of all time, The Dark Knight Rises, which hits theaters two and a half months after The Avengers.

So which film am I more excited for?

It is with a heavy heart, but sound mind, that I put my weight behind The Avengers.

Don’t get me wrong – I am giddy as a schoolboy for both movies and this summer will be the stuff childhood dreams are made of. Seriously – what does it say about a movie season when the third biggest movie is The Amazing Spider-Man?

It may be superfluous to try and apply logic to such an illogical thing as fanboyism, but I think I have some valid reasoning for my thoughts.

The Dark Knight Rises is tried and true. We know what a Christopher Nolan Batman movie looks and feels like, and he has done right by us, the moviegoer, every step of the way. Unlike other third films in comic book franchises (X-Men: The Last Stand, Spider-Man 3….oh, Spider-Man 3) I am certain that he will bring his A game, as will every member of cast and crew, for the final installment. But we have an idea of what we’re getting into. We also have a degree of expectation that is unparalleled. The Dark Knight was both a financial and critical darling, and to come up even a degree short of that pedigree would be tantamount to failure in the eyes of the public. That being said, I feel strongly that Nolan & Co. will come out ahead with The Dark Knight Rises. They took four years between films – took their time, calculated their story and will execute with near-perfection.

That brings me to my first vote in The Avengers column – the story. The Dark Knight Rises (be wary of SPOILERS here) is in part based on the 1990s story arc “Knightfall,” and while that story is epic in scope and will be exciting to see on screen, I know what it’s about. The Avengers, on the other hand, has been very good about keeping its tale under wraps.

Also, The Avengers is something the likes of which we have never seen before. It has taken six films whose domestic box office total is well over $1B and thrown them all in to one film together. Think about it – what if Axel Foley, Marty McFly, Peter Venkman and Indiana Jones all were in a movie together? This type of synergy is unprecedented, and I have great faith that it will pay off in spades.

We’re also saying goodbye with The Dark Knight Rises, and there is always something bittersweet about a farewell. However, The Avengers is just getting started. It’s new, it’s fresh and it’s got one of the best modern storytellers at the helm.

Despite his résumé having only one feature film on it (the critically loved but financially disappointing Serenity), Joss Whedon is probably the only man who can push my excitement for The Dark Knight Rises aside. The creator of such iconic television series as Buffy the Vampire Slayer, Angel and Firefly is the perfect person to tell the story of an eclectic group with extraordinary powers in extraordinary circumstances. He’s been doing it for years, and if the current Rotten Tomatoes score is any indication (94%), he’s doing it right on a much grander scale. Christopher Nolan makes me gasp with wonder – Joss Whedon makes me laugh, smile, cry and gasp.

There is no doubt both of these films will go down in history as some of the best superhero movies of all time – but The Avengers just might be the best.