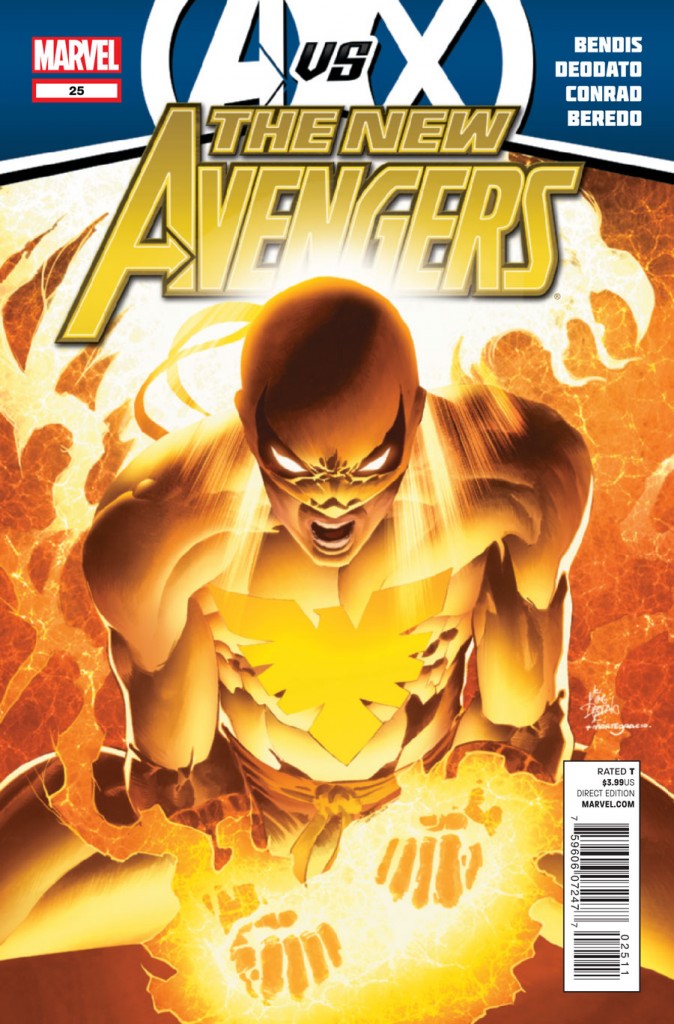 I have been eagerly awaiting New Avengers #25—I know, it sounds ridiculous after my previous ravings about the direction that the Avengers stable of books has taken under Brian Michael Bendis, but hear me out; both Avengers #24.1 and New Avengers #24 were very, very good books, and Mr. Bendis did a fine job illuminating the inner struggles and emotional depth of the re-constituted Vision in New Avengers, and in giving some quality “screen-time” to Luke Cage and Jessica Jones in Avengers, he brought true drama to the fore in a masterful dissection of the conflict between duty and family.

With the good feelings engendered by the fine treatment of one of my all-time favorites, Luke Cage, and the tease for #25 promising a glimpse inside the mind of Iron Fist (also a favorite since the Claremont/Byrne solo series, and continuing through Power Man & Iron Fist), I was hoping for a continuation of the “personal stories” trend, assuming that with AvX carrying the plot momentum, that New Avengers, for the time being at least, would confine itself to “super-human” interest, with the thrust of this particular issue on the mixture of the mystic realm of Iron Fist’s K’un Lun with the cosmic nature of the Phoenix Force, a blend that certainly warranted further exploration.

The issue opens promisingly, with a re-working of the splash page of AvX #1, but in this iteration, a red-haired young woman is substituted for the alien child gazing at his or her (it’s?) farmland from that book. Unfortunately (you knew there’d be an “unfortunately”, didn’t you?), this intriguing opening is followed by five “Phoenix-effect” pin-up pages. Now, don’t get me wrong, Mike Deodato’s art is gorgeous, and if I could afford to buy some, I’d proudly hang it on my wall, but c’mon…five pages!?! I still had hope, though, for another entertaining, smaller human drama from the pen of Mr. Bendis.

The story itself is rather good. Set hundreds of years ago, it revolves around Master Yu-Ti and his dream of a “Bird of Fire”, and his eventual discovery of a mute, crimson-tressed girl within his community. He shares his vision with The Thunderer, Lei-Kung, and instructs him to train her as the first Iron Fist the city has had in over 75 years.

And…that’s it. If you feel that I’m granting short shrift to this plot, don’t blame me, that’s all of it. In this brave, new world of de-compressed storytelling, what would have been a great 6-page first act of a superb comic book, is instead a disappointment of epic proportions. Not to be a skin-flint about it, but for $3.99 I require more than 9 pin-up pages (with one a virtual copy of another), and barely more words in actual dialogue and captions than there are in this review (I know, I counted—822).

I’ll be back for what I assume will be the conclusion of this story in #26, as this does promise to be an important addition to the larger themes of the “event”, but it will be with a bit of a jaded eye.

VERDICT:  This could turn out to be a fine story arc, and I’m willing–in fact– predisposed to love a good Iron Fist yarn, but for now I’ll have to grade this one as “Incomplete”.

ADDENDUM: Check out “Power Man & Iron Fist” (the original series!); beginning with the crossover issues of  “Luke Cage, Power Man” #48-50 and continuing through the final issue (#125), it was the best super-hero “buddy movie” this side of the O’Neill/Adams Green Lantern/Green Arrow.