Whether your walking into your  local comic book shop or perusing your favorite digital store front, sometimes it’s tough to know what books are safe for new eyes. That’s where we come in! Part review, part column, Start Reading Here is a feature on Talking Comics that let’s you know when you can jump onto a long running series. This week we say it you should start reading: 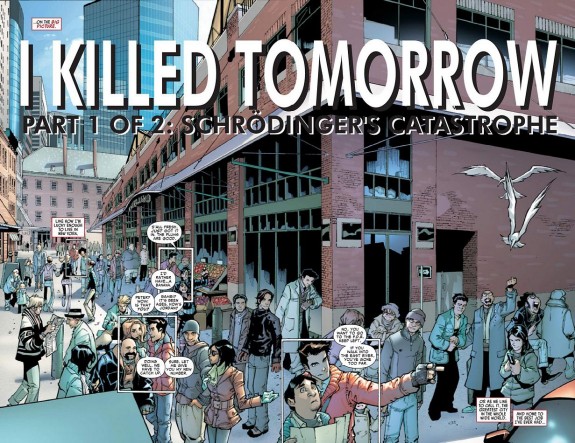 Peter Parker’s life is finally going right. He is part of two superhero teams, he loves the city he lives in and most of all he loves his job. The only thing on Peter’s mind on this particular day is getting through work on a rather tedious project… double-checking the work of a very unconventional co-worker.Well, it turns out that co-worker, Grady, has created a doorway that sends the person walking through it one day in into the future. Grady makes the trip with no consequence, but when Peter walks through the door we see what happens to New York City when it goes a day without Spider-Man. Now Parker, with the help of Grady, must race totry and prevent the horrifying future he has seen through this door to tomorrow.

I haven’t read an issue of Amazing Spider-Man since I was about 9 (I’m currently 29) but there is something uniquely comforting about a Spider-man book. For me, it’s like visiting an old friend and not missing a beat. That being said I’ve avoided the pages of Amazing because I’ve been terrified of the staggering continuity involved in enjoying it. This current issue entitled I Killed Tomorrow is the first part in a two part story that welcomes lapsed or new Spidey fans in with open arms.

Writer Dan Slott, in classic Marvel fashion, does a great job of bringing us into Peter Parker’s world in the first few pages of the issue. Although this introduction is mostly expositional it never feels slow or tedious. To the contrary Slott uses them to propel us into our time travel narrative.

I won’t get too deep into the machinations of Mr. Slott’s handling of the multiple time streams, but know that he navigates the waters of such a tricky plot very well. This is chiefly due to his dedication to making even a time travel plot as “Spider-Many” as possible. Meaning that no matter where you are in the book you are never a panel or more away from a hilarious quip or witty self reference. This dedication to the humor of Spider-Man never feels forced or tired and is one of the best reasons to pick up the title this month.

If you’ve avoided this title in the past but have always wanted to read it there has never been better time to jump on. I’m not sure what will happen after the I Killed Tomorrow storyline wraps up but I do believe that by that time you’ll be hooked on the adventures of Your Friendly Neighborhood Spider-Man!