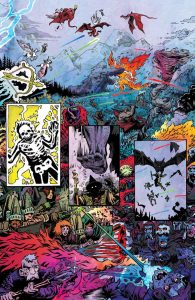 Wizard Beach is fantasy mixed with whimsy to create a fun premise and story that is well worth a read. Hex and his father find themselves, as wizards seem to always do, in a battle for their and wizards in general lives. So, Hex decides he should go find his Uncle Salazar, the strongest wizard known, who went to the human world. His uncle Salazar is not what he expects, he is a bit of a beach hippie-esque figure. When Salazar enters the story, Simon seems to revel in the moment and inject the story with a good dose of irreverent humour; with spice, and beard demons and a dead Dr. strange like wizard being sustained by his wand who has problems letting go. If this level of ridiculousness continues this miniseries should be a delight.

Nolan’s art is detailed and slightly grimy but still conveys the tongue in cheek nature of the issue. The use of colours help highlight the differences between the wizards both individually and amongst the humans; with Hex standing out amongst a sea of washed out grey humans. The splitting up of the issue in tree chapters helps give the comic more structure but also makes it feel like a fantasy novel being played out with Hex setting forth on his hero’s journey.

Verdict: Worth checking out. This is part one of a five-issue miniseries that is greatly entertaining and looks to continue the mix of fantasy, humour and skeletons surfing.